Today’s review for the 1981 flick The Survivor is timely as it is piggybacking on my DKTM post about the upcoming BBC adaptation of another of James Herbert’s works, The Secret of Crickley Hall. 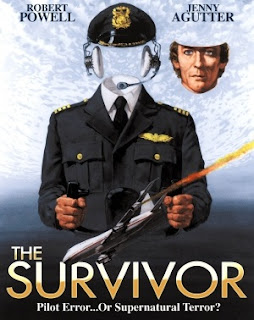 After surviving a devastating air disaster, pilot David Keller (Robert Powell) is racked with guilt. Shortly after the mass funeral, a medium named Hobbs (Jenny Agutter) contacts him saying she can hear the voices of the dead passengers – and they have a message for him...

Up until a few weeks ago, The Survivor was the last of Herbert’s current quartet of film adaptations that I had yet to see. You all know of my adoration of Deadly Eyes, and Fluke and The Haunted I caught during their initial releases – though with my love of Kate Beckinsale having blossomed in last decade, I believe the latter deserves a rewatch – but The Survivor remained elusive for many, many years. Then, thanks to Katarina's Nightmare Theater and Suspect Video, I managed to snag it on DVD while I was at Shock Stock.

The novel was one of the first of Herbert’s that I read, so my recollections of how close the film stayed to the original material is a little hazy. The broad strokes are there, however I recall the ending being a little bit more dramatic. While director David Hemmings – yes, that David Hemmings – had a decent handle on what it took to keep me interested, it did seem top heavy. I felt the plane crash at the movie's head was a little lacklustre, seemingly spending the majority of their budget on the explosion that immediately followed it. 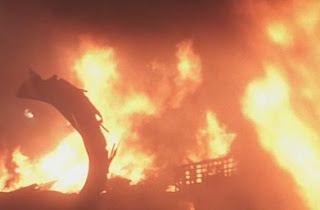 The Survivor is a film that is ninety-five percent atmosphere, which I can certainly appreciate, but once we get into the meat of the supernatural backbone of the story, the pacing becomes a problem. There are several scenes that are drawn out way too long and dulls the piece as a whole. It also seemed – and this could very well be due to the fact that I knew the endgame – that it took an incredibly long time for the two main characters to finally intersect. 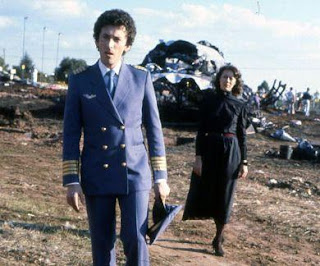 Powell & Agutter amid the wreckage

So, even though my experience of finally watching The Survivor may have been anti-climactic, I never balk at an opportunity to watch Jenny Agutter onscreen. Her character was actually a man in the book, but shockingly this little transgression didn't bother me. Here's one final observation. Anyone else notice that the main character's name was David Keller, which is only one-letter off the name of a backpacker-turned-lycanthrope whom Agutter would soon after share screen time with. How's that for wacky film trivia?
Posted by Jay Clarke at 12:32 PM