Hello all.  I'm up a little earlier today, trying to get some work in before checking out a day's worth of flicks downtown.  Here's what I've got for you this week.


On the heels of my last archives post, it seems fitting to mention that Jaws is coming to Blu-ray on August 14th, and boy is it ever a beaut.  Not only is it loaded with extras, including the long-awaiting documentary The Shark Is Still Working, but the film itself has been painstakingly restored.  Take a look at this promo showcasing all the work that Universal put into bringing this movie to Blu-ray.


It is also good to know that Spielberg learned from his mistakes re-releasing E.T, and did not fuck with the original movie.  If only his buddy George could have that same epiphany.  Click here for the rundown of the full Blu-ray package over at Collider.com


I was elated to hear that BBC1 is adapting James Herbert's book The Secret of Crickley Hall for broadcast this Halloween.  I've always said that Herbert is one of horror's most unmined resources, having only had four of his books - out of twenty odd - adapted over the years. Crickley Hall tells the story of a broken family who moves into a new home, only to soon realize that it is haunted. The film will star Suranne Jones (of Coronation Street fame), Tom Ellis and Douglas Henshall. This book is one that has been sitting on my shelf unread for years, so this is the perfect motivation for me to blow the dust off it. 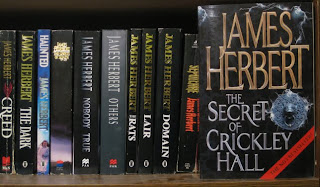 Hopefully, this will be the project that opens the floodgates for Herbert adaptations.  Creed anyone?

This week it was announced that the Toronto After Dark Film Festival will return to its original home at the Bloor Cinema.  Not only that, but TAD is also running a few spotlight presentations during the summer on June 27th and July 11th to further expand the After Dark festivities.  Each night will showcase two genre offerings, shorts and include an after party. The actual festival runs a whopping nine nights from October 18-26th.  For more info, go here.  You can also follow TAD on Facebook, by clicking here.
Posted by Jay Clarke at 9:06 AM