Well, that was a nice little break after all the madness of my 1000th Post and Shock Stock festivities. Here now, are some Sunday brunch goodies.

This is a few weeks old now, but I couldn't let this custom made coffee table go by without mention. 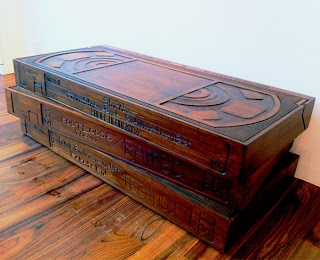 Badass! Although, taping over Star Wars with Police Academy 4 is rather blasphemous. 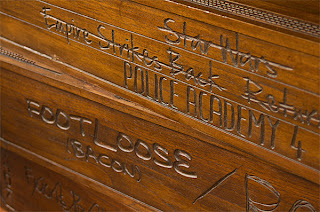 Looking at that reminds me of the time my brother discovered that I taped over Blue Thunder with Easy Money. He wasn't impressed. I think the only thing that could make this table better is if you had the option to have your own movies put on it, or at least room on the label to carve some in yourself.

This week I saw a trailer for a new VHS documentary from the guys at VHShitfest called Adjust Your Tracking.


As you would expect, this is certainly something I can get behind, and you can to by visiting their Kickstarter page. This does look similar to the VHS doc that popped online last month called Traces of Analog, as it shares some of the same talking heads, but Tracking seems to have a few directors and heavy hitter Tony Timpone on board, as well. The guys over at VHShitfest are among the top authorities on this subject, so if anyone's going to pull off a definitive doc, it'll be them.  I wish them luck and look forward to the finished product.

I came across this friggin' awesome animation piece this week. I know it's a few years old now, but that doesn't make it any less cool.