When I saw The Walking Dead video game pop up on my PSN dashboard, I was skeptical. I figured it was sure to be shovel ware, but downloaded the demo anyway. A short time later, I was shelling out twenty bones for a season pass. 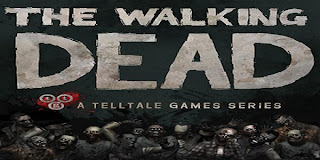 I was initially going to wait until I played through all five episodes before I talked about this, but it appears there will be a sizable gap between parts, so here goes.

The Walking Dead is, quite simply, a great gaming experience. Telltale Games have melded the dialogue branching of Mass Effect, the immersion and QTE's of Heavy Rain and the mechanics of Sierra's old Quest games into one wonderful gaming stew. I think I've always wanted the latter oeuvre to make a triumphant return. I'm willing to accept the clunkiness of the point & click interface just because it brings with it the joy of nostalgia. Overall though, I think it was the emphasis on dialogue that really pulled me in. How you interact with the characters you meet really matters and the decisions you make have a lasting effect. 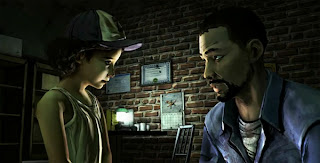 I very much like the cell shaded art style of The Walking Dead, recalling its roots in the comic book. I also like that this game exists within the canon of the source material, with a few familiar characters and locales popping up throughout the episode. The animations are a little clunky at times, but considering these episodes only cost me a mere four dollars each, that is a mere gripe. And though the graphics are lacking, there are infinitely helped by strong voice acting and a story that is on par with the show.

Telltale Games have been knocking it out of the park in regards to episodic DLC – with previous games such as Back to the Future and Jurassic Park – but I don't think it has ever fit as well as it does with The Walking Dead. I'm excited for the next chapter, and hope I don't have to wait too long for it. If you're a fan of the comic or the show, this is a must play. For everyone else, give the demo a try. I'll be surprised if it doesn't sink its teeth into you.