Through the power of retroactive blogging, I give you this Don't Kill The Messenger.  At the moment of this posting, I can guarantee I am unconscious somewhere after having been up all night watching eighties movies at this year's edition of Shock & Awe.  More on that later, for now, here's what happened this week.


How's this for awesome? The Alamo Drafthouse has been recreating the summer movie season of 1982, which includes the likes of Conan, E.T, Star Trek II, Poltergeist, Blade Runner, and perhaps most importantly John Carpenter's The Thing.  Naturally, Mondo has been creating original posters for these screenings, but they came up with something extra special for The Thing.  In addition to their original print, they also teamed up with the original artist - the iconic Drew Struzan - for a gorgeous variant of the 1982 version. 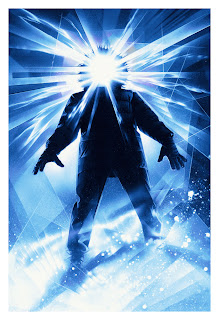 Want it? I hope you've got deep pockets because they start at $250. In connection with this announcement, Movies.com posted an interview with Struzan here.  Here's a snip below.


Movies.com:  I know that creating the art for The Thing was an unusual process over 30 years ago. Can you tell me what happened?


Struzan: I got a phone call, the simplest phone call I ever got, saying, "We have a job, we want to know if you can do it, the catch is we need it by tomorrow." So they're talking a major motion picture with a full color, painted poster and they wanted it by the next morning. [Laughs] I said, "Sure, what is it?" and they said, "Do you remember the movie The Thing from the '60s?" "Yeah, I saw it. Neat movie." "Well, we're redoing it. That's what it is." "Okay, cool. You need it when?" "Tomorrow morning. We don't have any photos for you, we don't have any concept stuff, we just want you to do the drawing of what you think you'd do and then do a painting of it by tomorrow morning." "That's it? You spent millions of dollars on this thing and you don't have any reference materials, just make it however I feel? Sure, I'll try." [Laughs]


This is further proof that - like James Horner's unforgettable score for Aliens - sometimes the best stuff is done on a deadline.

I was very sad to hear of the passing of character actor Richard Lynch this week. He died last Monday in Palm Springs, Califorinia at the age of seventy-six.  He had over one-hundred-and-fifty titles to his credit, and was a recurring face on television during my childhood, as he always popping up on TV shows I ingested like Automan, Blue Thunder, The A Team & Werewolf.  His rugged looks had him often playing the villain, and therefore did many horror films during his career, two of my faves being Bad Dreams and Puppet Master III - the latter playing Major Krauss who became the inspiration for the puppet Blade.  My all-time favourite role of Richard Lynch's though, was his turn opposite Chuck Norris in the balls-out eighties action flick Invasion USA.  Here below, is a clip where he deals with a young Billy Drago.


On the heels of the poster released for the upcoming horror anthology film V/H/S, is this red band trailer.  I must warn you though, it is chock full of potential SPOILERS, so watch at your own risk.