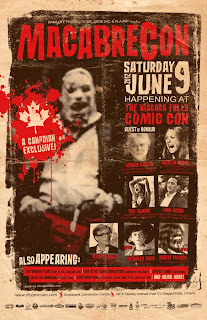 It was a really good time with a fantastic turnout. The convention centre floor was a fairly large space with equal areas given to comic book artists, celebrities and vendor booths. 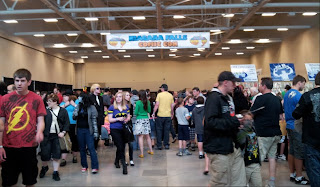 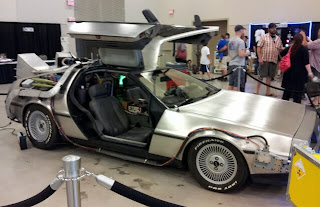 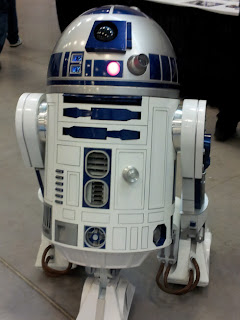 There was also a gaming booth, which was demoing, among other things, the new zombie game Lollipop Chainsaw. 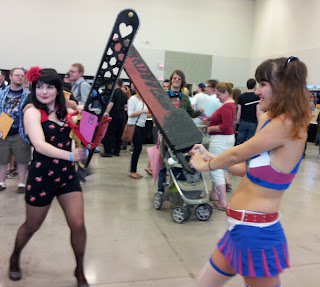 There was also an added element to this event, that I made sure to take advantage of.

I walked around the show floor, bought the newest Walking Dead trade from Mostly Comics and a DVD previously unknown to me from Suspect.

I also spent a lot of the day hanging with the crew from Android Re-Enactment. 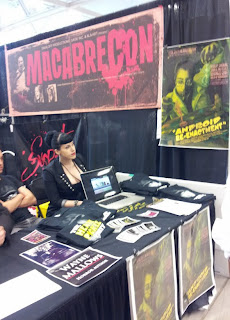 However, my main reason for attending was the Texas Chainsaw Massacre Reunion, which included a screening and a Q&A with three members of the original cast, Gunnar Hansen (Leatherface) Marilyn Burns (Sally) and Teri McMinn (Pam). The post-screening discussion was really fun and all three seemed in very good spirits.

It started out with them answering questions about if they think there are any modern ‘Texas Chainsaws’ to which the answer was a resounding no. Gunnar then used the differences between the 1974 and 2003 versions of the film to prove his point.

“Everytime they (the remake) have a chance to make it really disturbing, they chicken out and splatter blood on you. The great example being when the girl finds her boyfriend hanging on the meat hook with his leg cut off, with his toes touching the keyboard. They could have made that scene excruciating because they are deathly afraid that Leatherface is going to show up. What if that scene had been five, six, seven minutes long? And she's struggling to get him off the hook. His toes are touching the piano, so they're making noise, I mean the audience would have been horrified because any second he's going to come back. It would have been like the dinner scene (in the original). But instead, she gives up immediately and guts him. Literally, it's a bloodbath. Just a big bucket of blood splashes all over her. And I thought, do they really think this is psychological horror? They chickened out.”

It is pretty clear to anyone who has seen the film that it was a gruelling experience to shoot, so they all recounted which scenes were the most difficult. For Hansen & Burns, it was the dinner scene, which was filmed over a marathon shooting day of twenty-six hours in hundred plus degree heat. For McMinn, it was her death scene which had to be shot over and over because of director Tobe Hooper’s fondness for multiple takes. It was McMinn who I found to be the most charming, especially while relating her apprehension about a certain iconic camera setup. 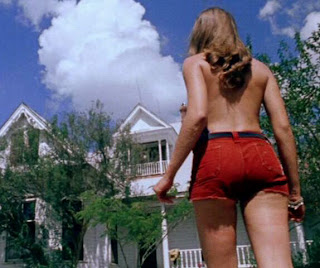 “At that time wearing red short shorts and your cheeks showing was a very risqué thing to do. I was very worried because I came out to the set that morning and I see Daniel (the cinematographer) hunched over the camera under the swing. I knew what was supposed to happen and that I was going to have to sit on that swing. I'd never taken Tobe on about anything so far, but I went over and said 'come on, what's the camera doing there?' So Toby and I argued for about ten minutes and after I stood my ground, he just said, 'Oh Teri, dammit, I'll just shoot around it.' So I thought, great, my cheeks won't be in the shot. Then of course, when I went to the screening for the first time to see it, I was so embarrassed to have, in Cinemascope and Technicolor, my cheeks going, ba-badum-bada-badum across the screen.”

The trio also confirmed that Paul Partain (Franklin) was just as miserable offscreen as he was on. Burns made a point to mention that they had made amends at a recent convention though. It turns out that he'd been method acting and deliberately staying in character the entire length of the shoot.

Someone asked about the upcoming Texas Chainsaw 3D project, which Hansen and Burns are both in. They were forbidden to say much, but did reveal that the movie picks up right after where the original left off. Hansen added that he saw some footage while doing some recent ADR and was quite impressed. 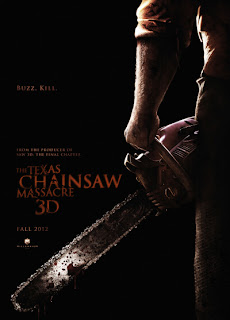 I had a great time at this show and I'm sure the event was enough of a success to warrant future iterations. Congrats to those involved for pulling it off. For me, it was back on the road and straight up the QEW to the WWSFF event Night Shift.