Off to see the ol' patriarch shortly, so I'll get right to it this morning.

A Return To Midian.

There was fantastic news out of Los Angeles recently, as the New Beverley played hosted to the restored director's cut of Nightbreed that the fans have been craving for years. With director Clive Barker in attendance, along with the film's lead Craig Sheffer and some of the production team, this was one hot ticket indeed.  Barker plans to not only tour this "Cabal cut" around the US (and fingers crossed, Canada) but also eventually release the film on Blu-ray.  Here's where we come in though.  In order for rights holder Morgan Creek to put money into a release, they must be first convinced by the movie's fan base that it is a worthwhile venture.  You can Occupy Midian, by going here.  Below, courtesy of Fangoria, is some footage of the event .  Barker still doesn't look one-hundred percent, but it is very good to see him out and about after his recent health woes.


A while back, the Toronto After Dark Film Festival announced it would be playing four films as part of a summer film series, ahead of its usual string of nine nights in October. Well, earlier this week, the four films were announced. 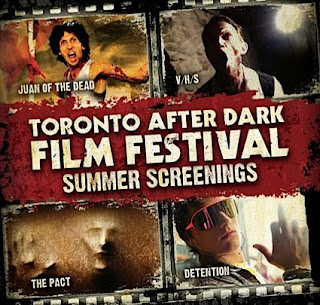 On Wednesday June 27th, The Bloor will be host to the cuban zombie tale Juan of the Dead and Canadian haunted house flick The Pact. Then a few weeks later, on July 11, Joseph Kahn's Detention followed by the super-anticipated anthology film V/H/S.


I have seen Detention and Juan of the Dead already, so this event to me is all about V/H/S.  Speaking of which, the film just released a sweet poster a few days ago.

For more information on getting tickets, check out the festival website, by going here.


Lastly, a friend recently turned me on this indie video game called The Lone Survivor.  It is a cool retro-2D survival horror game which reminds me a lot of Silent Hill.  Here's a peek.


You can currently play the demo on Congregate, or buy the entire game for $10 at their website.  I've played it and simply put, it is awesome.
Posted by Jay Clarke at 11:30 AM