It was a busy weekend for me, but I made sure to catch Abraham Lincoln: Vampire Hunter. 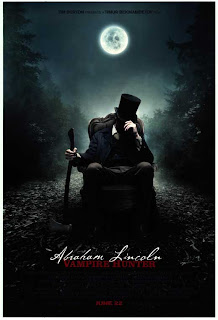 Abraham Lincoln (Benjamin Walker) not only had to run the United States of America, but also keep it from being overrun by vampires. With only a few companions and his trusty silver-coated axe, this is his story.

This movie was tons of fun. I'm a fan of Timur Bekmambetov's work (Nightwatch, Wanted) and it's refreshing to see he is still rocking his tried-and-true blend of over-the-top visuals with epic ideas. This man knows how to shoot an action sequence, and there are two great set pieces that anchor this movie. I think this is what has always impressed me about Bekmambetov. He is notorious for doing unbelievable things in his movies – the Mazda driving along a sidescraper in Daywatch and the curving bullets in Wanted to name two – but within the context of how he presents them, they seem plausible, or at least enough for me to suspend my disbelief. The same is true for his latest venture. I mean, it should be obvious from the title that this is not a movie that should be taken seriously.

For all intents and purposes, Abraham Lincoln: Vampire Hunter is a big budget B movie. It has all the sensibilities of the gothic vampires movies we grew up on, but with all of Bekmambetov's multi-million dollar toys. He takes many liberties with American history, but it worked for me because all of the actors involved, heroes and villains, were invested one-hundred percent. The pace was also rather expedient. The origin story is set up, quickly followed by Lincoln being mentored by rogue vampire Henry Sturgess (Dominic Cooper) and then we're off to the races. Also, there was a big bonus for me, as I did not realize that Mary Elizatbeth Winstead was in this. When she came onscreen, my impression of the movie immediately went up a few notches.

For the most part, I was totally in this movie. It was pretty much what I was expecting and hoping for. The trailer is a pretty good representation of what you are in for, so if that struck your fancy, you'll likely have a good time with Abraham Lincoln: Vampire Hunter.
Posted by Jay Clarke at 10:00 AM