Playdead Does It Again.

Last week, I took a break from exploring the universe of No Man's Sky to check out Playdead's newest Inside, which just dropped on the Playstation Network. I'd been eagerly awaiting this title for ages because their predecessor Limbo was essentially a perfect game.

It's rare, in any media, let alone gaming that a much anticipated follow-up can reach the lofty heights of its predecessor, but Inside did just that. It was another flawless gaming experience that was, in some ways, even better than Limbo. Inside borrows the 2D aesthetic and gameplay elements from Limbo, but goes to places far beyond what came before it. The game play is much more varied, and as soon as you think you've seen all it has to offer, Inside adds another layer. I read an extremely apt quote from Kotaku that said, “a series of escalating 'holy shit' moments.” I couldn't have put it better myself.


The mono-chromatic look may not be as stark and foreboding as Limbo, but it gave the developers an opportunity to do more with the environments. The crash colours of the boy's red shirt, and various mechanisms really pop out at you. While Limbo was a pretty contained story, there is an expanded world to Inside of which it feels you are only seeing a small part. And yet, despite this broadening, the 2D game play always kept you clear on where you were supposed to be going. 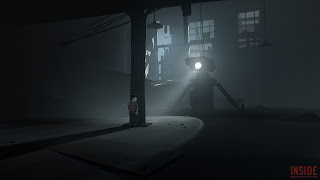 As you would expect, the puzzles are devilishly clever and very fun to ponder through. I'd say Inside was not as difficult or punishing as Limbo, which was fine because it made me appear smarter than I actually am. In terms of challenge, if Limbo was a ten, Inside would clock in at around an eight. However, I have to re-iterate that the puzzle variety of Inside over the course of the game was superior.


Another thing I was very appreciative of, and what justified its twenty-seven dollar price tag, was the re-playablility. Now, while it is true that Limbo had those little glow-worms you could step on, Inside's inclusion of the light orbs added much to the experience, as I only found two of the fourteen my first time through. Subsequently, a handful of them were pretty hard to find, and a few of those even had their own puzzles attached to them. I also liked that in addition to gaining trophies, you were also working toward an alternate ending. Pretty awesome stuff. 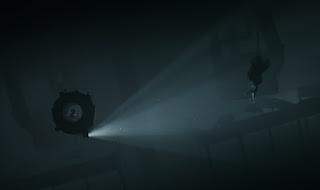 So, yeah, Inside is another must-play in my opinion, as Playdead are at the forefront when it comes to contained game play experiences. All we can do know is sit back and wait for the trifecta.
Posted by Jay Clarke at 12:30 PM