I was absolutely gutted to hear about the passing of H.G. Lewis yesterday. He was 87.

Affectionately known as “The Godfather of Gore” by his fans and peers alike, his contribution to horror is immeasurable. The nineteen-sixties were painted scarlet with his Blood Trilogy that consisted of Blood Feast (1963), Two Thousand Maniacs (1964) and Color Me Blood Red (1965). His work was crucial in feeding my love of gore, as seeing Two Thousand Maniacs as a kid was revelatory.

It wasn't just the copious amounts of red stuff, but also just how much the filmmakers seemed to relish it. There was an over-the-top ingenuity to how the unfortunate Northerners were dispatched in that movie. H.G. Lewis' debut Blood Feast was brazen in how far they went, but the set pieces in Two Thousand Maniacs were just insanity.


Later on, while working at the video store, I remember that I was gifted our rental copy of Color Me Blood Red after too many parents complained about the cover being in plain sight. Their loss was my gain. As a matter of fact, that very copy greets you every time you visit my site, right up there in the banner. 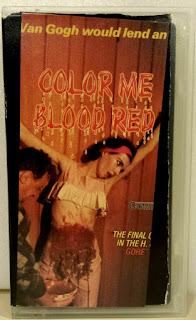 Shortly thereafter, I would see the man himself in person at Fangoria's only convention stop in Toronto in 1991.


In 2010, I saw him honoured at Fantasia with a screening of his biopic as well as Blood Feast on 35mm. See Lewis belt out “The South Shall Rise Again” in its entirety was a highlight to be sure.

Lewis paved the way for the generations of gorehounds that came after him, and he will be sorely missed. Rest in peace, Mr. Lewis.
Posted by Jay Clarke at 10:00 AM