My first full day at Fantasia concluded with a screening of the aptly titled Herschell Gordon Lewis documentary, The Godfather Of Gore.

You could really feel the love in the room that night. When Lewis was introduced before the film, he was met with a standing ovation that completely humbled him. In addition to Lewis, the stage filled with some very distinguished people; co-directors Jimmy Maslon and Frank Henenlotter – a legend in his own right - as well as Something Weird founder Mike Vraney. 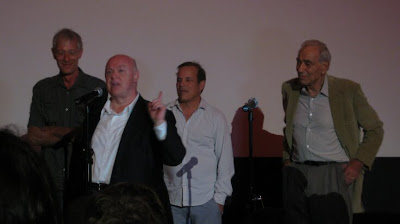 Vraney, Henenlotter, Maslon and the man himself, H.G. Lewis.

The documentary is a fun time for anyone who grew up watching his Lewis' flicks. Starting with his early “nudie cutie” pictures of the early sixties, it then examines his creation of the “gore” flick with 1963's Blood Feast and his decade run of carnage thereafter. I think the audience ate it up. It was clear that a good deal of the crowd hadn't seen all his films, as there were many audible reactions from the many different “money shots” that are flashed during the film, like The Wizard Of Gore drill press scene – that coincidentally went mainstream when featured in 2007's indie darling Juno – and the chocolate breast milk toast from The Gore Gore Girls. 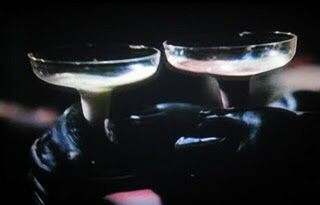 God, I love that scene. The most curious thing about The Godfather Of Gore is that its inherent shoddiness somehow comes off as endearing. I mean, I can't fault them for it, the four people introduced earlier were the crew, so it was obviously a labour of love. When it comes right down to it though, it kind of makes sense that a doc about H.G. Lewis would have a flying-by-the-seat-of-their-pants feel to it. However, that's not to say there aren't scraps of real creativity. There's a great chunk where they revisit St. Cloud, the town they used for Two Thousand Maniacs – Lewis's self-professed favourite of his works – and it cuts back between present day and the movie. The doc also shows off some recently discovered footage of an unfinished Lewis project from 1966 called An Eye for An Eye.

During the Q&A, when Henenlotter mentioned that the first cut of the doc was three-and-a-half hours, I don't think I was alone when I thought, 'I'd kinda like to see that cut'. The highlight was definitely when Lewis sang the entire theme song to Two Thousand Maniacs, “The South Shall Rise Again”, on the condition we all joined in for the “Yeeeeee-has!” I so wished I had video of that, but I was too caught up in the moment. The man is very spry for an eighty-one-year-old. 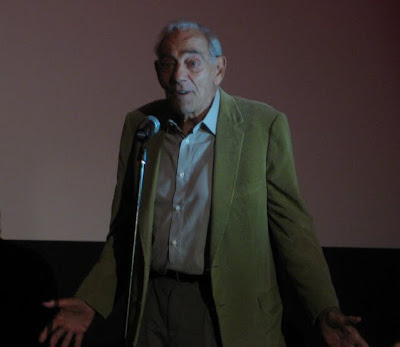 Perhaps he's had an Egyptian feast or two along the way.

Afterwards, a good deal of the crowd stayed for a free screening of Blood Feast. The print looked pretty good considering it's probably been sitting around for forty years. The projection seemed a little dark in points, but hey, it's not like I hadn't already seen it several times, right?

I've seen Lewis three times in person now and I never get tired of hearing him reminisce. He's right up there with apple pie and baseball when I think of American institutions.
Posted by Jay Clarke at 9:05 PM