A trip to a genre film festival would not be complete without catching a zombie flick, so last Saturday afternoon I took in Evil: In The Time Of Heroes. 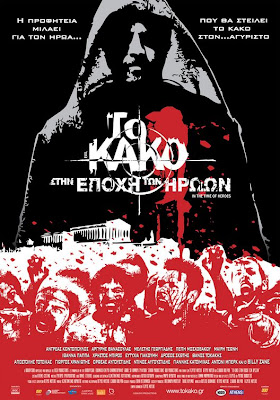 After a zombie apocalypse hits Athens, a small group of survivors try to fight their way out of the city.

I was aware that In the Time of Heroes was a sequel to a low-budget Greek effort from 2005 for which I had not seen, but I was under the impression that it was kind of what Evil Dead 2 was to its predecessor. It was a sequel, but really a redo, undertaken with more resources and preparation. While that may be the case, I still felt like I was missing something throughout this movie. Perhaps if I had seen the first flick, I would have been more prepared for just how chaotic this thing was in every aspect.

In the Time of Heroes is a jumbled mess of ideas, the majority of them completely absurd. I assume that was likely the point, but there’s no continuity to it. Characters appear and disappear for no reason, some possess superhuman abilities – one guy actually outruns a bullet then later jumps a hundred feet in the air – with absolutely no explanation and the narrative flashes back and forth from Ancient Greece to present day at the drop of a hat.

It still manages to keep you laughing though. There are so many things being thrown at the screen that you just can’t help it, as the gore does flow liberally and the majority of the characters are amusing. Probably the most bizarre thing about this movie is the head-scratching cameo by Billy Zane. I shit you not, there is a black & white sequence of nothing but spinning, disembodied Zane heads that goes on for like thirty seconds. Can you imagine it? 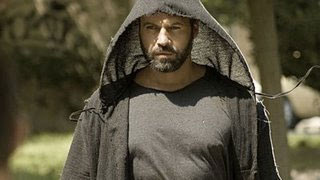 In the Time of Heroes is one of those movies where you are just left shaking your head after seeing it, but still have a smile on your face regardless. Despite its lack of consistency, I still got some enjoyment out of it.

My friend Peter, who was constantly throwing his hands up as to say "wtf" during the screening, put it best when he said that In the Time of Heroes felt like an extended demo reel. Ideas, ideas and more ideas, but no real thread connecting them. This is very true, which makes for a decidedly empty experience, but there are enough gags to keep you chuckling and therefore not really care.
Posted by Jay Clarke at 5:30 PM