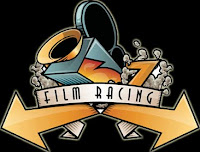 First, let me get you updated on what happened with my latest 24-hour Film Race short, as the awards were handed out a few days ago. If it seems like this happened quickly, that's because it did. For some reason, they decided not to do the whole posting-the-top-five-thing and just cut to the chase. I asked them why and they said they just wanted to announce the winners as soon as possible. I don't really understand the logic in this, as now no one gets to see the films, except those who came out to the screening. I thought the whole purpose of this thing was to expose the public to independent filmmakers, but whatever.

Anyhoo, the awards. We did pretty well by placing third in this year's competition, as well as winning Best Makeup and Best Set Design. I unfortunately have no link for "J Plus K" right now, but hopefully Darrin will be putting it online sometime in the next week.

Jason Bene over at KillerFilm gave us another doozy this week. He somehow managed to score an interview with John Carpenter. To discuss his entire career would take days, so Jason understandably chose a single title to focus on - 1987's Prince Of Darkness. Here's a snippet.

Jason Bene: You took an intellectual approach to science vs. religion and how both of them perceive the devil. Did you do research on metaphysics and atomic theory?

John Carpenter: A lot. It isn’t exactly a devil. It’s an Anti-God, which is very different. The devil by biblical terms is just a fallen angel. He started a rebellion in Heaven and was cast out. He’s not on the evil par with the deity. This is an anti-deity basically. I guess I didn’t explain that very well in the movie.

Jason Bene: You seemed to be going for the less is more approach with Frank Carrisosa’s make-up effects. Were you happy with the final results?

Jason Bene: The dream sequence involving the tachyon sent from the future is a foreboding piece of celluloid that fans still talk about to this day. Every time I discuss this flick, that’s the scene everyone says freaked them out.

John Carpenter: That’s weird. I never thought of that. That’s great. That’s interesting. I have to keep that in mind.