Last Thursday, I took a trip out to the Underground Cinema to see Night of the Living Dead: Reanimated, but came by early as they were screening a locally produced indie called Zombie Dearest beforehand. I figured, why not support the home crowd, right? 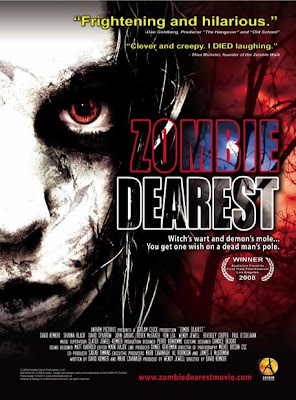 Failed comedy writer Gus (David Kemker) tries to win back his ex-girlfriend Deborah (Shauna Black) by fixing up her old farmhouse. While excavating the septic line, he inadvertently digs up a zombie. In a flash of genius, Gus gets the zombie to do his work for him, but quickly realizes that keeping it a secret will be an even tougher job.

Now, I know this may not be fair, but when I hear tiny, locally-produced-for-nothing zombie movie, my first reaction is lower my standards. There I was watching this, expecting to cringe my way throughout, but you know what; those moments never came. To my surprise, it wasn't terrible. It's actually pretty funny comedy. Well, more specifically a romantic comedy with a zombie in it, but trust me, that's not as bad as it sounds.

The cinematography is excellent in Zombie Dearest and grabs you almost immediately. When a low budget film is shot well, that's the first thing you notice and it can instantly lift your opinion. Having a talented eye in your corner is invaluable. I can remember having the same thing happen in the opening moments of Street Trash. It also helps that it's a comedy that is, you know, actually good for a few laughs. Although it sometimes veers off into weird places, like this bizarre S&M montage that comes out of nowhere, it kept me interested throughout. The acting is, for the most part solid and David Sparrow, who you'll recognize instantly if you've spent anytime watching Canadian television, is great as the zombie workman, Quinto. 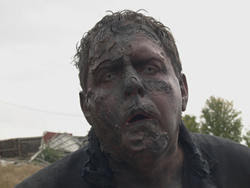 I wish more people turned out for the screening. There were about twenty people in the audience and over half of them worked on the film. I suspect they didn't really have any money to sink into advertising. The director David Kemker conducted a Q&A anyway where I was shocked to learn that they shot this on an impressive fourteen-day schedule.

Considering I took a gamble here, I was pleasantly surprised. I certainly got more enjoyment out of this picture, than I did from the one I actually showed up to see, but more on that later. Zombie Dearest is a quirky story that is competently made, which is more than I can say for a lot of micro-budget stuff out there. I'm not sure how big the audience is for a movie like this. The majority of zombie fans will likely find this on the tame side, and comedy fans generally prefer their movies sans flesh eaters, but you never know. If it were to pop up on VOD in the future, you may want to take a bite.
Posted by Jay Clarke at 10:05 AM

You have a contact for the director? Maybe I can give him some exposure if he's interested in a review.

I don't, but let me see what I can find out.