Now that all this Fantasia business is out of the way, I was finally able to catch the newest installment of The Millenium Trilogy, The Girl Who Played with Fire, at my local multiplex. As you’ll remember, I really dug the inaugural film The Girl with the Dragon Tattoo, so was totally stoked for the next one. 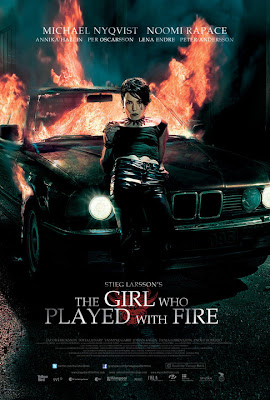 When two of journalist Mikael Blomqvist's (Michael Nyqvist) colleagues are murdered while investigating a sex trafficking ring, it is Lisbeth (Noomi Rapace) who inadvertantly becomes a suspect.

Yeah, this is a tremendous series the Swedes have got going here. Fire is a great film with well-defined characters and pitch perfect storytelling. However, I have to say I didn't find this one nearly as engaging as Tattoo, although that may be more of a preference thing, rather than anything to do with the actual film.

Tattoo is a tough act to follow, man. I just watched it again on Blu-ray a few days ago and everything about that film just pulls me in. First of all, one of the many strengths of Tattoo was the relationship between Mikael & Lisbeth. Normally, these two characters would never ever cross paths, but due to the circumstances laid out in the first film, they became a great team. In Fire, they are separated, each with their own parallel storyline. I know why this happens, as this second film is more about Lisbeth (whereas Tattoo was primarily about Mikael) and it made sense for her character to fight her demons alone. I just, in the back of my mind, always kept waiting for them to be reunited.

Fire also ends very abruptly, which is again in contrast to Tattoo. The first film had a twenty-minute epilogue, yet Fire seemed about that length too short. They totally Empire'd the ending! I can only wager that Fire was meant to be a bridge between two larger stories, the events in Tattoo and whatever is coming up in the last film, The Girl Who Kicked the Hornet's Nest. Thank God I only have to wait until November to see how this all turns out.

Despite being a different director this time around – Daniel Alfredson, brother of Tomas 'Let the Right One In' Alfredson – the style was still very similar to that of Niels Arden Oplev's Tattoo. That was a relief, as that can be jarring when you switch directors mid-franchise, like when Paul Greengrass replaced Doug Liman on the Bourne films. I wasn't a fan of that change-up, but here the transition is pretty seamless.

The Millenium Trilogy is classic mystery filmmaking that is not afraid to deal in extremely dark subject matter. I expect that once I have seen them all, they will fit together brilliantly as one gigantic film. For anyone who enjoys good thrillers, this stuff is required viewing.
Posted by Jay Clarke at 10:04 AM