So, that was the haul from this year's trip. I think I saw about eleven features, including a trip to the AMC to catch Predators - which wasn't great, but certainly not as bad as some people are making it out to be. I think it delivers on a lot of what the trailers promised.

As for what we got up to while in Montreal? Well, the opening party was pretty cool. The music could have been better, but the live performances were entertaining at least. In addition to the Roller Girls Vs Snow White Gang dance-off, there was also this... whatever she's supposed to be.

I unfortunately missed both opportunities to see Rubber, which sucks because that's one of the buzz pictures this year. Since the World Cup Final went into extra time, we got to the theatre late and because it was such a hot ticket, we couldn't get in with our passes. Oh, well, I'm sure it will hit Toronto at some point. I did get to see the third place match - the way more exciting of the two - in its entirety in my hotel room. 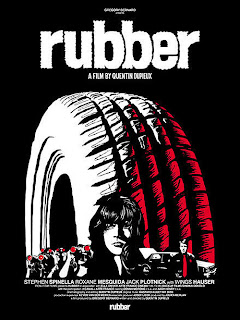 The weather was on our side for the most part. The sweltering humidity - that we'd been experiencing in Ontario for the last week - followed us to Montreal, but it fortunately broke after the rainstorm we got on the second day. After that, it was perfect patio weather. Speaking of which, as with previous years, there was a LOT of time spent at The Irish Embassy, hanging with like-minded individuals. I was good to see Paul & Andy from Dread Central again, as well as meet new people other film festivals, like Calgary and Boston.

I forgot that they had Moosehead on tap, so I was very happy to drain their stores. And of course, the food. The wonderful food. Everything tastes amazing there, from the four-dollar breakfasts to the late-night smoked meat sandwiches.

Nectar of the Gods.

I think the only bother during the whole trip, was having to spend a good hour on the phone to my bank trying to get my access card sorted out. Banks tend to frown upon sudden large withdrawals from cities that are not your own.

It is hard to compare this Montreal trip to previous ones, but it seemed like I did more this time around. This was likely due to lodging in the suburbs last year, so there was a lot of travel and downtime. This time around, we were steps away from all that we needed.

Let the countdown to next year begin!
Posted by Jay Clarke at 9:28 AM