The six hours before the screening of the I Spit on Your Grave remake was spent at The Irish Embassy. Anyone familiar with the subject matter of the infamous original will understand why it seemed like a good idea to make sure we had enough alcohol in us before enduring what was likely to be a very unpleasant experience.

I can't imagine what our waitress must have thought, coming in and out of our rapey conversations, which included a ten-minute tangent about wererape that was birthed by a website typo. Although, I guess she couldn't have been too offended because at one point she brought over her iPhone to show us that YouTube turtle sex video. I don't mean to make light of a serious subject here, but this was the mood set by the approaching ten o' clock bell of the gallows. 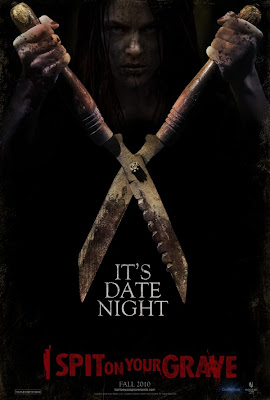 When novelist Jennifer Hills (Sarah Butler) travels out to a remote cabin to work on her next book, she is quickly set upon by a gang of locals. Beaten, raped and left to die, she emerges days later with only one thing in mind. Bloody revenge.

I have to say that to my absolute surprise, the 2010 I Spit on Your Grave is actually pretty fucking solid. I found it to be way more palatable than the original and when I say that by no means do I mean watered down. It's still an ugly experience, but director Steven R. Monroe does a really smart thing and puts the emphasis on the revenge, rather than the rape. That's not to say the first half is a walk in the park though. There is a painful amount of preamble and humiliation brought forth on Jennifer before even getting to the inevitable. When she later runs into the sheriff, played by Andrew Howard, you know things are about to get even worse for her. Howard (Devil's Chair, Blood River, Pig) is the LAST person on Earth you want to run into if you're a woman in distress. In the original, the rape scenes went on forever and the revenge was almost an afterthought, only taking up the last twenty minutes of the movie. With Monroe's version, he takes his time and now lets Jennifer toy with her assaulters, much like they did to her. 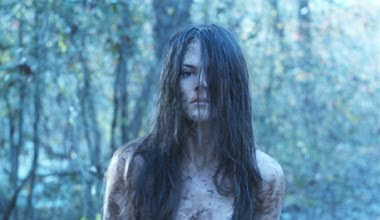 Butler does an awesome job and tackles this difficult role head-on. The kill scenes are very elaborate, which I suppose we've come to expect in this Saw-laden era of ours, but I Spit on Your Grave goes beyond the call of duty. It feels that the punishments almost fit the crime here. I'm also not used to seeing Andrew Howard actually get his comeuppance. After all the terrible things I've seen him do over the years, seeing him vulnerable may have been the most shocking part of the film for me.

Now, onto the Q&A after, which was one of the most out-of-control affairs to which I've ever been witness. And by out-of-control, I mean lack of moderation. Right out of the gate, some guy who was obviously drunk or drugged up – or both – piped up that Monroe's movie was bullshit and was even allowed to get up on stage. Only at Fantasia. Talking to Monroe later at the bar, I could see he was rattled and not impressed by the way that situation was handled. I hope he subsequently grows a thicker skin because I'm sure there is more condemnation coming in the future. I really wish we'd all gotten to hear more from the absolutely lovely Sarah Butler, but the majority of the Q&A was taken up by producer and original I Spit director Meir Zarchi. This guy likes to talk, or more accurately, ramble. H.G. Lewis he is not. There is a screening of the original film coming up in Toronto next month, which he and star Camille Keaton will be attending and I fear she's not going to be able to get a word in edge-wise. 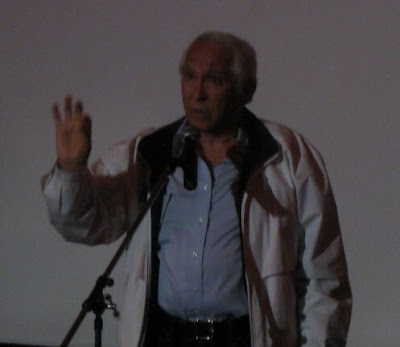 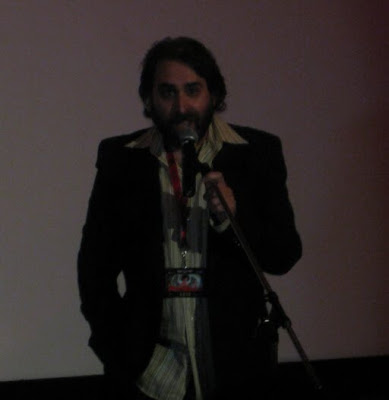 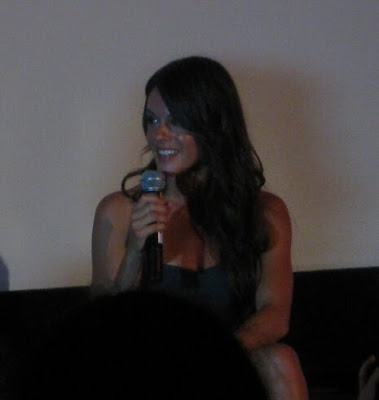 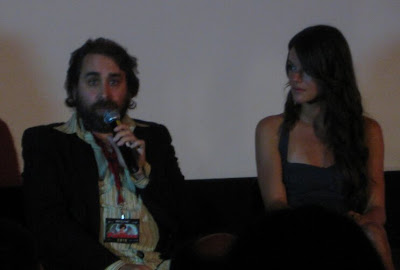 Afterwards, we also found out that someone had helped the marketing along, by leaving a pool of blood on the floor after taking a nosedive down the stairs while vacating the theatre – surprisingly not during the rape, but rather a later scene involving fishhooks. After being at the infamous Hostel screening in 2005, I'm starting to wonder if the producers plant these people.

Remakes are a dime-a-dozen these days, but if you want one that captures the original's essence and updates it for today's thrill-seeking audiences, I doubt you are going to find anything that delivers more than I Spit on Your Grave.
Posted by Jay Clarke at 11:23 AM

Cool. I'll check this one out after all. I was curious how they would structure the movie, knowing that they couldn't have a 40 minute rape scene like the original. This sounds like it is more along the lines of The Last House on the Left remake (which I sorta liked). The original is really about the rape and degradation, and less about the revenge than any of thee "rape/revenge" movies. Oh well, cool blog. I'll check more of it out. I wrote a review of I Spit on Your Grave btw: http://cinemagonzo.blogspot.com/2010/07/i-spit-on-your-grave-1978-rapiest-movie.html

While I enjoyed most of your article Jay I am a bit confused and kind of disappointed at one statement you made... "Talking to Monroe later at the bar, I could see he was rattled and not impressed by the way that situation was handled. I hope he subsequently grows a thicker skin because I'm sure there is more condemnation coming in the future". I also spoke with Steven after the screening while he was signing posters, I asked him what he thought of the situation during the Q & A and he told me that he was quite annoyed with the fact that this drunk and or wasted guy that rambled on and kept repeating himself was allowed to take up so much time of the Q & A (especially just after Meir Zarchi the director of the original just had done the same mumbling and talking about himself for 15 minutes). He then said that it was not fair to all the people that paid to be at the screening and stayed so late to ask questions that were screwed now and he didn't think that was fair at all to any of them. He was glad and fine with the fact that this guy made his statement and disliked his version of the film, but quite angry that he was allowed to go on for so long. So my question to you is, what does that have to do with you saying that you hope he grows thicker skin? That statement just feels like a ego driven "I'm cooler than you Mr. Director" statement that really makes no sense at all based on what happened, or even based on what you wrote just before that about him being rattled and not impressed with how it was handled which was exactly what he was upset about... Not WHAT was said by that f-ed up s#%thead.

To come off as "I'm cooler than you Mr. Director" was obviously not my intention.

I didn't make the distinction you made from the brief exchange I had with him, so it was just my observation. If he's cool with negative feedback, then I'm sure he'll be fine.