I make it no secret here that I adore Japanese splatter cinema, especially the sort that have appeared in the last few years. So, imagine my delight when I found out that at this year’s Fantasia, I would be seeing not one, but two new titles. 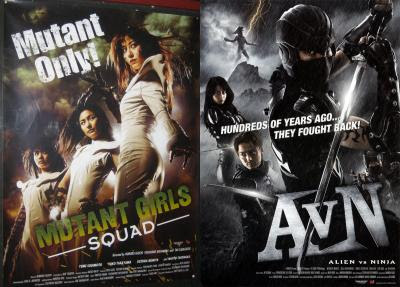 First up, a midnight showing of Mutant Girls Squad. This is a collaboration between Noboru Iguchi (Machine Girl), Tak Sakaguchi (Be A Man: Samurai School) and Yoshihiro Nishimura (Tokyo Gore Police) where each contributed a third of the movie. The night started off with a bang when Nishimura & producer Yoshinori Chiba announced the upcoming line-up for his new distribution company Sushi Typhoon. Some of the titles were the aforementioned Alien Vs Ninja, Sion Sono's newest Cold Fish and Nishimura's spiritual sequel to Tokyo Gore Police, the zombie epic Hell Driver, for which we later saw a trailer. The screen was stained with red before the feature even started. 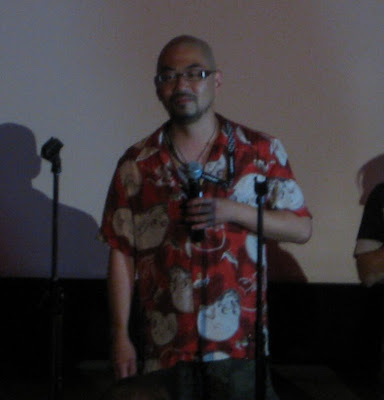 So, now that you know who was involved, it should not surprise you at all to hear that Mutant Girls Squad was batshit loco. The movie was super fun and if you are familiar at all with their previous works, you know exactly what to expect. I would say that the first third (Sakaguchi's part) was definitely the best. It's the most well rounded of the three and featured my favourite sequence where raging schoolgirl Rin (Yumi Sugimoto) singlehandedly – pun intended – takes out the populace of an entire village. Idea men Iguchi & Nishimura then stuff the rest of the picture with their signature brand of wit, severed limbs and arterial spray. The middle does lag a bit, but Nishimura brings it home, with a conclusion like only he could conceive. There seems to be no limit to their imagination as Mutant Girls Squad may have packed in more insanity than that of even Tokyo Gore Police. Exploding heads, ass chainsaws, breast swords, French bread and hilarious copyright infringements abound. Really, how hard is it to watch three lovely ladies hack & slash their way through ninety minutes? The answer is not hard at all.

I'd like to take a second to address how I may come off as being hypocritical by what I’ve just typed above. Yesterday, I was condemning Evil: In the Time of Heroes for being absurd and incoherent and now I'm praising Mutant Girls Squad for essentially doing the same thing. Well, when it comes to these Japanese efforts, they are consistent in their ridiculousness. Sure, there are women with machinegun appendages and alligator vaginas, but it somehow makes sense in the universe they exist in. I never got that feeling with In the Time Of Heroes. Plus, there are Japanese schoolgirls.

What was I talking about?

Oh right, yeah. The craziness didn’t stop when the movie ended, as Nishimura took the stage for the Q&A wearing only sumo garb – as he did at the recent NYAFF premiere. That is, until a ninja (Chiba in disguise) rushed the stage and promptly ripped them off, leaving Nishimura naked for almost the entire interview, with only a tiny satchel to hide his package. Judging from how mortified his translator looked; I don’t think she was in on the joke. 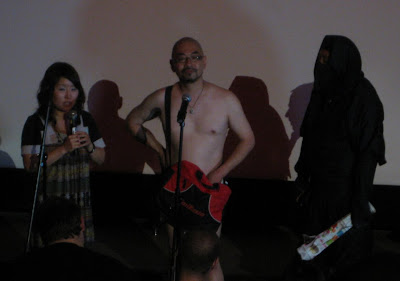 The next afternoon, I came back to the same theatre to take in Alien Vs Ninja. I’m kind of surprised to say that it was even better, as it was certainly not the one of the pair I was most looking forward to. Seiji Chiba & Yuji Shimomura have really outdone themselves here. The fight choreography was fantastic, even bettering their previous effort Death Trance by a sizable margin. It’s really funny too, with lots of gags that elicited genuine laughter from the audience. It also wasn’t as CG heavy as I was expecting. There’s a fair share of man-in-suit sections, which make for some great action and comedy. I would say that some bits were actually even more enjoyable than Predators – which I saw a few days before – as both share a few of the same beats.

Alien Vs Ninja is just a good time, but of a more substantial variety than Mutant Girls Squad. I enjoyed both a great deal, but if I were to recommend one, it would be AVN. Needless to say, there was a sustained period last weekend where you couldn’t wipe the smile from my face.
Posted by Jay Clarke at 6:52 PM