So, as I mentioned, I was at the Underground to see Night of the Living Dead: Renanimated.

For those who don't know, NOTLD:R is a fan-made project that has been in the works for sometime. About one-hundred-and-fifty artists got together and each recreated a scene from the original 1968 George A. Romero classic Night of the Living Dead. This consisted of synchronizing hand-drawn sketches, stop-motion, CG and even Half Life 2 mods, up to the original soundtrack of the film. 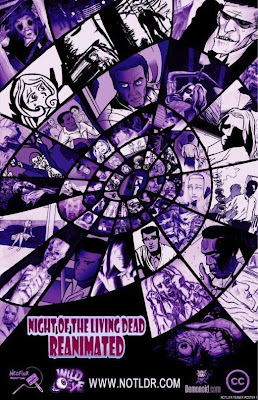 So, here's the thing. NOTLD:R is a case of something being a great idea that didn't translate into reality. Don't get me wrong, there's some awesome stuff in here, but it is very hit and miss. The problem is the pacing. Obviously, there are sections of the film that everyone wanted to do, so there's tons of submitted material to choose from in those areas. During the opening graveyard scene, the animation style switches frenetically. Conversely, there are huge sections of the film that are static. You can hear the action going on in the background, but there are single-frame sketches onscreen for sometimes as long as ten seconds. It was in these dull spots, that I wished I was just watching the actual film. I enjoy art as much as the next guy, but the title says re-animated. 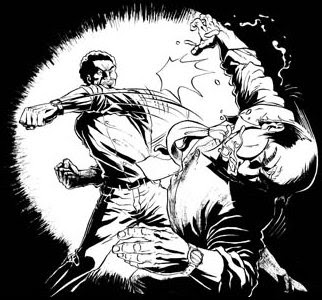 NOTLD:R is an experiment that feels incomplete, like it came out of the lab too soon. I wish the organizers had insisted on animation, so the movie would always be flowing. By the end of it, I was a little worn out. It may be more palatable viewed at home in chunks, so its more creative pieces can be more easily picked out from within the messy canvas of the whole.

Below is the short, "So You're A Zombie" that played before the film.

Sounds like one of those fun experiments you have to see but won't return to very often.