It Came From The Archives 27!

Twenty-five years ago, Fangoria's perennial fan convention Weekend of Horrors made its one and only trip to Toronto (and as far as I know all of Canada). This milestone would have no doubt passed unnoticed if a reader hadn't happened to email me asking if I had any pictures of the event. After responding that I did, it clicked that the anniversary was imminent and thus perfect timing for another Archives post. 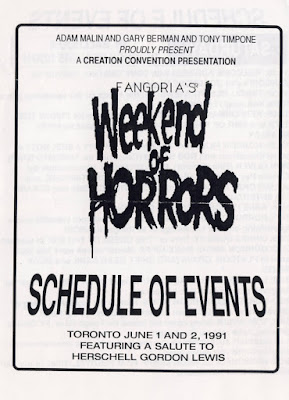 By this time in my life I was a full-on fanatic. I had been working at Major Video for almost a year and it was feeding my obsession nicely. I was watching more movies in a day than most did in a week. I don't think I had my driver's license by then, so thank goodness my older brother was gracious enough to shuttle us in. The guest list was impressive, even with the last-minute cancellation by Bruce Campbell.

I remember the dealer's room being fairly large, and it was similar to Monsterpalooza in that there were several make-up demonstrations going on throughout the day. I've talked before about basically opening up my wallet to the poster guy, but there was lots of other great merch there, as well. I remember I picked up a T2 shirt that I practically lived in that summer. In retrospect, I wished I'd rifled through the bins of scripts they had at one of the booths.


Anyway, the photos. Given my limited photography skills, I'm surprised these turned out at all. Truth be told, it was probably my brother snapping all these pics. It's kind of amazing how much of this event I can remember considering it was a quarter century ago.


I think I spoke about my interaction with Kane Hodder in my Friday the 13th archives post. He was super cool then, and been just as cool the two times I've seen him since. 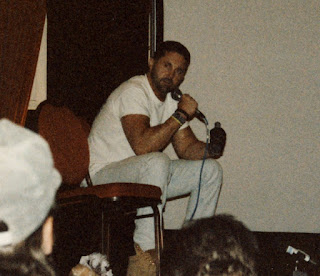 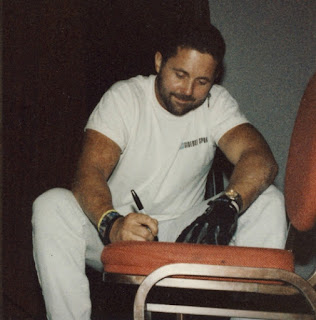 Tom Savini gave a memorable Q&A. I've seen a few people online tell the story of Savini getting down on his knees and apologizing to all in attendance for The Ripper, and it happened at this show. 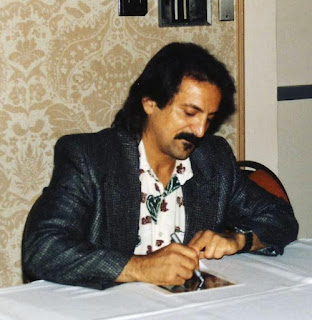 Linnea Quigley was a sweetheart. If I recall correctly about the photo below, she had a bunch of people come up on stage and re-enact her cemetery dance scene from Return of the Living Dead, for which we judged the winner. 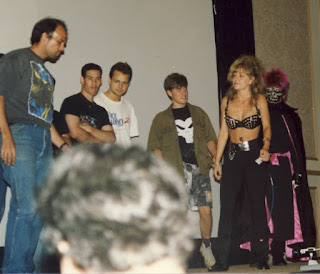 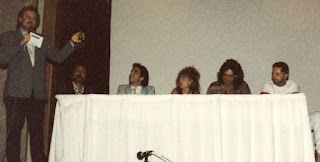 And the winners were...

Nowadays, the GTA has over a half-dozen fan conventions a year, but in the early nineties, this thing was a revelation. For me, it was really the first time the curtain between film and reality was lifted. It was surreal to say the least. I hope you enjoyed these little windows into the past. Until next time...
Posted by Jay Clarke at 10:00 AM