Last weekend, I took the trip down the 401 to engage in London's annual scumbag soiree Shock Stock. 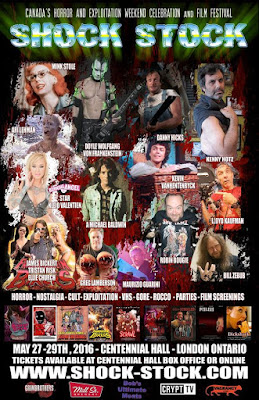 The show floor was noticeably less busy this year, most likely due to some unfortunate factors that included a huge street hockey tournament hijacking several blocks around the venue. It made access a little problematic to say the least. Shock Stock this year was also scheduled in close proximity to Niagara Comic Con, which may have diluted numbers a tad. No matter. Even though Zack from The Vault was not there, I still managed to come away with a shit-ton of VHS. 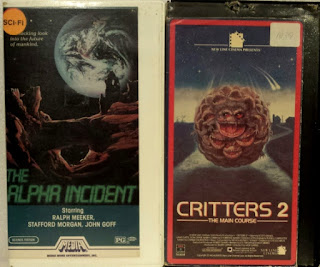 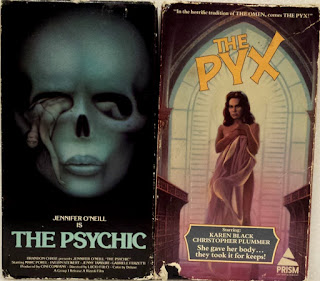 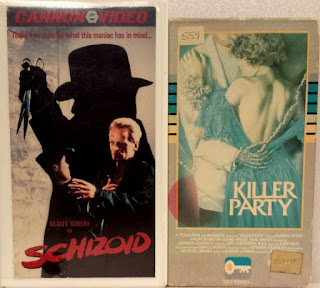 And speaking of VHS, there was a fun panel on Friday afternoon about the home video era featuring four genre figures who were smack dab in the middle of it - ‎Kevin Van Hentenryck (Basket Case), A. Michael Baldwin (Phantasm), Danny Hicks (Evil Dead 2) and B-movie titan Lloyd Kaufman. They happily reminisced about the VHS boom, the film business then and now, and the evil entity known as the MPAA. You can check out the panel below.


Later that night saw the Canadian premiere of James Bickert's Frankenstein Created Bikers at the lovely Hyland Theatre - the only theatre left in London with a 35mm projector if I heard correctly. Sadly, the only thing that theatre didn't have was proper stage lighting which is why I don't have any decent pictures of the event. 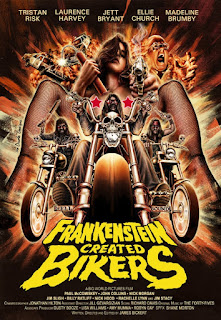 When Jake introduced the movie as an epic, I thought “yeah, right” but holy Geez did Bickert cram a lot into the two-hour running time. Zombie bikers, kitty-masked minions, a Sasquatch, a trans assassin and keystone cops are just a few things that show up between explosions and gunfights. That's not even counting the shenanigans that leading ladies Tristan Risk, Ellie Church and Madeline Brumby get up to. For those who dig this retro-Grindhouse movement, this may just be the pinnacle of sex, sleaze and sin.

I did say that the event was uncharacteristically sedate, but this by no means carried over when the sun went down. The parties were as crazy as ever. As I may have said before, Shock Stock has morphed into more of a mass hangout over the last few years. This is not a Fan Expo, it's a community event where filmmakers rub elbows with fans and don't charge mass amounts of money for the privilege.

There were a ton of music acts this year, including bands featuring Van Hentenryck and Ari Lehman (Jason from F13), as well as Chris Alexander's giallo-centric outfit backed up on drums by Dave Bertrand. Here's some video I took. That little camera jerk eleven seconds into the vid is me getting sprayed in the face with fake blood.


Fortunately, I was at the one party where being covered in red did not seem out of place. Jake got thrown through a table again, before having a cinder block smashed on his crotch, so yeah, it was a great night. I caught up with a lot of people and left my high score on the Galaga machine. It's all about life goals.

There were a few things new to the show this year, like a vintage video game area (Nintendo NOES & F13) and a Vagrancy Brothers Escape Room, but the biggest addition was the first annual Crystal Shocker Awards.

The awards ceremony, hosted by the Monsters of Schlock and Jake, was as classy as you would expect with the following being among the one taking home the glass;


Those are the ones I can remember off the top of my head, I'll add the rest as I remember them.

Getting away for the weekend and hanging with some like-minded individuals was just what I needed. James & Jake, you guys are the best scumbags around. Don't ever change!
Posted by Jay Clarke at 10:00 AM

Hey Jay, sounds like you had a good time at Shock Stock. Did you get a chance to see PEELERS? https://www.youtube.com/watch?v=emkSNaAAsEk We were stoked to walk away with the Best Feature Film Award!! http://shock-stock.com/shockers-awards/. My best... oh, and keep the bloody blog rolling!! - Sevé Schelenz (Director/Producer - PEELERS)