This year's Midnight Madness concluded on Saturday with a classic confrontation between the two horror icons from The Ring and The Grudge franchises, Sadako vs. Kayako. 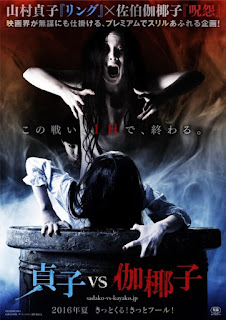 After a pair of young women discover and watch the cursed video tape, they seek the help of a pair of ghost hunters who hatch a scheme to pit Sadako against another local vengeful spirit, Kayako.

These type of event pictures are nothing new, as its been almost seventy years since Abbott & Costello first met Frankenstein. Even in Japanese cinema, Godzilla once fought King Kong, so I suppose that now that Sadako & Kayako are now pop culture icons (they even recently threw out the first pitch at a Japanese baseball game) its seems this match-up was inevitable in much the same way as Freddy vs. Jason was in this neck of the woods.

I have to say Sadako vs. Kayako was surprisingly entertaining. For what could have been a cheap gimmick, it was actually pretty well put together. Director Kôji Shiraishi (of Noroi: The Curse fame) was in on the joke and made this effort incredibly easy to digest. I liked the evolution of the lore surrounding the cursed video tape in that it had become a well known urban legend, to the point that one character had become so obsessed with Sadako that he was offering a reward to anyone who could acquire it for him. I'm not sure why the death countdown was inexplicably changed from the seven days to two, but I can assume it just better served the script. 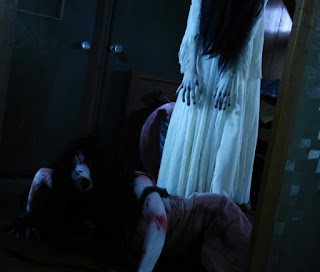 Even though the tone of the movie was rather light and comedic, there was still room for some fun scares as Sadako and Kayako continued their modus operandi of being able to strike from anywhere. It is a testament to their design that no matter how ridiculous they become (they spent their time in Toronto getting their hair done, and visiting the candy store Sweet Jesus), their appearance and accompanying audio cues still manage to put people on edge.

The highlight of the movie for me were the pair of ghost hunters that come onto the scene when all seems lost. I immediately recognized Masanobu Ando from his appearance as the psychotic Kazuo in 2000's Battle Royale and he and his young blind sidekick Tamao's (Mai Kikuchi) blunt force humour were pretty great. The ending of the movie was rather abrupt, but the aftermath of what happened when Sadako and Kayako were pitted against each other made for some crazy visuals.

It was a solid year at Midnight Madness with some real crowd pleasers in Free Fire and The Belko Experiment, as well as those that revitalized their respective subgenres like Raw and The Girl With All the Gifts.
Posted by Jay Clarke at 6:00 PM