Toronto's yearly nerd prom, Fan Expo descended on the city last weekend. I had distanced myself from the event since Rue Morgue left, but decided to go one day this year to see the sights and hang out with my buddy Schwartz.

It was a fun time, even if I did find myself looking for things to do by the end of the day. Fan Expo did feature a “horror section” tucked off in the corner, but it was pretty anemic. Aside from stalwarts like Black Fawn and Troma, there were none of the usual players there. Even the one horror panel I was intending to check out, The Blair Witch Reunion got cancelled at the zero hour. That was a bummer. However, there's was some cool genre stuff on display.


I picked up some cool stuff, including the new Creepshow doc Just Desserts on Blu-ray. Also, this amazing card set for five freaking dollars!


Toronto After Dark was there as per usual to announce the first nine titles in their 2016 line-up. Not pictured is the super awesome Polish mermaid musical The Lure. 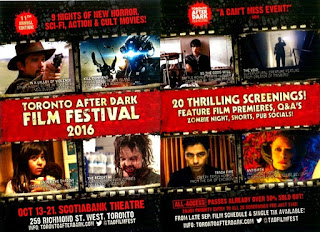 So glad The Void is playing here in October!


After feeling the absence of horror at this Expo, I realized that it doesn't or didn't really ever need to be there. The emphasis at this type of event should be on comics and cosplay, which was always a big part of it, but it felt even more so now.

Horror-themed conventions live on in entities like Horror-Rama, Shock Stock & Dark Carnival and will continue to flourish as attractions and not afterthoughts. That suits me just fine.
Posted by Jay Clarke at 3:00 PM