All right... First Messenger post of 2017! Forgive me if I seem a little groggy, I was up until four a.m. playing an incredibly engaging video game. Here's what I have for you today.

Look What Came In From The Cold.

One of my fave horrors from 2015, Oz Perkins' February (now re-titled The Blackcoat's Daughter) is finally getting a release in 2017. 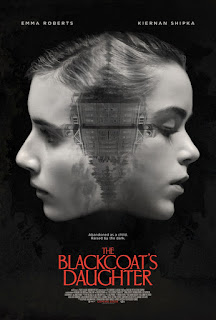 I'm happy to see that, as I thought for sure this had been relegated to Netflix oblivion. The plan is to premiere on DirecTV in the midd le of (coincidentally) February with a theatrical release on March 31st. This flick features three great performances from its young leads Emma Roberts, Keirnan Shipka & Lucy Boynton and seethes with atmosphere. Be sure to check it out.

Much has been said about the family Christmas caper Home Alone's cartoonishly violent undertones, but YouTuber BitMassive has done one better by digitally inserting realistic physical trauma on the two thieves, Harry & Marv. These are really great.


Here's something I wasn't expecting. A new Chucky movie! Here's the teaser below.


As long as Brad Dourif is still doing the voice, I'm in.
Posted by Jay Clarke at 1:38 PM

I'm still playing TWoM! It's very punishing, but I think I might have finally got the hang of it the third time around.
I really liked the TWD games, but I had to stop halfway through the 2nd season of Clementine's arc. It was just too stressful.