The Friday That Never Was.

I made a comment a few weeks ago that I was pretty nonchalant about the fact that the new Friday the 13th film had been abandoned. My curiosity got the better of me though, so I ended up reading the script.

Turns out it wasn't terrible. It had some pretty decent set pieces and writer Nick Antosca made an effort to keep you guessing as to who the Final Girl was going to be. I actually read scripts (Black & Blood List mostly) quite often now and eighties period pieces are ubiquitous at the moment - especially after Stranger Things hit it big on Netflix last year. I have to say that this one was, apart from the caretaker being named Frank Booth, probably the least obnoxious in that regard -- most obnoxious if you're wondering is a little ditty called Summer of '84 which I'm sure will be eye-rolling onto screens in 2018.


It's not all gravy though. He's tinkered with the timeline a bit and for some reason Jason isn't actually referred to by name until the third act, as if we weren't supposed to know who he was. There is also a big climax that I suspect is the reason the bean counters inevitably pulled the plug. Not that Jason hasn't had his share of ridiculous foibles, but the sequence in Antosca's script reminded me of the Cenobites vs. Cops scene in Hellraiser III. The series really never recovered from that. 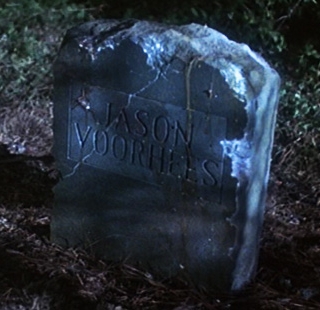 Anyway, it's kind of ironic. The minute that Platinum Dunes was about to produce a remake that might have turned out half decent, it ends up getting shit-canned. Where were these fucking suits when all their previous mess-terpieces went to camera???

Rant over. Let's just enjoy the game and be done with it.
Posted by Jay Clarke at 10:00 AM

You're looking forward to this one too? The movie series was not as big a deal to me as to you, going way back to when we would have first seen them on VHS, but I enjoyed the early installments enough. Looking back it's funny to think what you could get away with renting at that age. I think the only time someone said no was a Jumbo once.

Had the chance to see some gameplay footage through an IGN article. The author had access to an alpha/beta private release. While not the most sophisticated video game out there, in terms of pushing the boundaries of graphics or game engine, it seems to nicely balance out. The person playing Jason has a very overpowered character who can pick other people's characters off. But if the group playing the campers can cooperate enough over audio, they can execute a strategy to survive and win. Some people will bitch about Jason being able to seeming teleport and see through walls, but I after all these movies I don't think canon is critical.

Don't know about it's availability outside of PC, but on Steam there's a similar game, Dead by Daylight. One killer with the other players trying to survive. This one has bad reviews because of it's unbalanced gameplay that people are exploiting, and technical glitches in the early release. One of the killers that can be used is Michael Myers.

What I've really been enjoying recently is 7 Days to Die. At it's core it's a zombie survival game, and there appear to be a number of these on the market already, such as Dayz. What's good about this one is how it delivers on different types of gameplay at once. While not the most modern of looking graphics, it's a sandbox type of environment; there's a trade off. Like with This War of Mine and, from what I'm told, like Minecraft, there is a lot of resource gathering and crafting of tools, weapons and building blocks. A lot of resource managing and making the best use of time. In the daytime finding items or mining is easy as the zombies are slow and can be avoided. Each night they go feral and can run and chase. As per the title, each 7th night the zombies will go feral and hunt you down wherever you are, and the game becomes tower defense where you try and outlast the attack with the work you've done expanding your base.

Yeah, crazy what my parents let me watch when I was a kid.

I was in on that F13 beta, but I couldn't get it to run properly, lots of lag. I pre-ordered the PS4 version so I imagine I'll have better luck with that. If I get to play as F13 Part 7 Jason I'll be a happy camper (yukyuk)