Today is National Canadian Film Day, so if you feel so inclined, bust out a flick from the Great White North. Yesterday, in celebration of the affair, the boys of the Laser Blast Film Society put on a double bill of their own with Nick DiLiberto's animation wonder Nova Seed and Lawrence Zazelenchuk's 1974 zombie yarn Corpse Eaters. 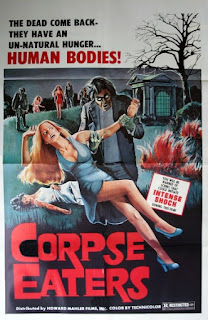 It was my fourth time seeing Nova Seed, so needless to say how much I adore that, but Corpse Eaters was completely new to me. Made in Sudbury from funds saved up by working at the local nickel mine, Zazelenchuk produced what was to be Canada's first gore film.


It is rough as hell with a story that lacks well, pretty much anything, but it does have its charms - my favourite part being the onscreen warning system the movie employed. When things were about to get bloody, an old man retching into a handkerchief appeared. Only, after his first appearance it was like he left to take a walk or something because he only reappeared once more toward the end of the film. 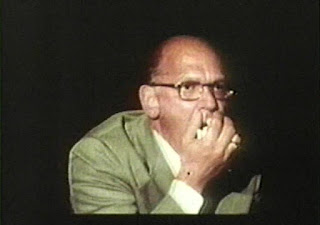 The middle chunk plays like a rehash of Bob Clark's Children Shouldn't Play With Dead Things, except with more awkward sex scenes, inter-cut with wildlife and Molson Export product placement. The movie does deliver on the gore, but the movie - even at under an hour long - feels loooong.


The behind-the-scenes story connected to this movie is rather sad. Zazelenchuk had made the movie to fulfill a life-long dream to play a film at the local Drive-In that he also owned. After a local run, he sold the movie to a New York distributor which promptly shelved it. So distraught was he that Zazelenchuk moved to Florida and proceeding to drink himself to death. Isn't the film business grand? 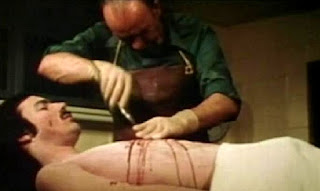 Corpse Eaters is a curiosity that is worth watching for its historical significance at least. Happy Canadian Film Day everyone!
Posted by Jay Clarke at 6:49 PM