Good afternoon everyone. Here's some genre morsels to chew on.


Rue Morgue turned me onto the work of Bill Butler this week. Inspired by Matryoshka, the Russian nesting dolls that fit into one another, Butler decided to handcraft his own, using pop culture figures as his subjects. Though he has done dolls for Ghostbusters and various Nintendo characters, my favourite would naturally be his version of the numerous incarnations of the Voorhees clan. 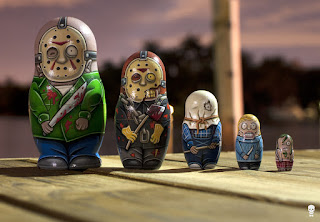 
It looks like there is another slasher-themed television show (to add to the already produced Scream and Scream Queens) in the works. Slasher will be a eight-episode event airing on Chiller in the US, and Super Channel here in Canada.


There isn't a lot known about it right now, except that it revolves around a woman who returns to a small town where her parents were murdered, only to find that copycat killings have started anew. The cast includes Katie McGrath, Brendan Jay McLaren (who also appeared in the similarly themed Harper's Island in 2009) and Alysa King. I'm hopeful for this one, as I think this subject matter is far better suited to a set length than an open ended one, as is the case with the two aforementioned projects.


In the last few weeks, there's been a large influx of horror short films that have come to my attention. I mean there's never a shortage of shorts being uploaded to the Web, but there's been a few contests and articles written recently that have kept me very busy. First, there is a horror short challenge wrapping up over at Tentsquare that features several dozen entries, of which three are below.


Secondly, Matt Molgaard over at Dread Central put up a cool and in-depth post about ten offerings currently infecting the online universe. A sampling is below, but the full article is here.