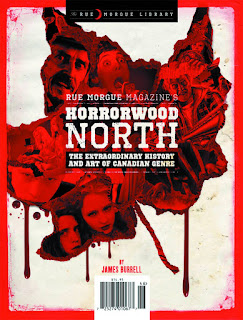 Horrorwood North is a longtime passion project by RM contributor James Burrell. Spurred on by a childhood viewing of Prom Night, he has since always been drawn to the output of the Great White North, and the subtle differences from our southern counterparts.

Though this book may not be as comprehensive as 2004’s They Came From Within by Caelum Vatnsdal, it is very digestible, and also has the advantage of being able to speak of the last decade of Canuck horror cinema – that brought us such pictures as Pontypool, American Mary and Hobo With A Shotgun, as well as saw the rise of Astron 6 and Black Fawn Films.

Horrorwood North is a nice looking package with tons of colour – if I did have one complaint about Satanic Panic, it was its monochromatic appearance – and bursting with posters, lobby cards and BTS images. Burrell utilizes the easiest way to break down Canadian genre film, sorting by the tax shelter era of the seventies and eighties and the years that came before and after.

I found this book a really pleasurable read. Naturally, I was aware of most of the stuff covered, but have to admit I didn’t realize that some mentioned were Canadian, like Humongous, The Uncanny and Grace. And my mind was blown when I read in the wonderful piece on Ginger Snaps that the title role was first offered to Scarlett Johansson. Not taking anything away from the amazing Katharine Isabelle, but holy shit, I wouldn’t mind visiting that alternate universe for a few hours…

Even though Burrell does make an effort to cover as many films as possible, I was disappointed that two of my favourites – Ed Hunt’s The Brain (1988) and Robert Clouse’s Deadly Eyes (1982) were reduced to mere footnotes. And the fact that Jon Knautz’s 2010 film The Shrine wasn’t even mentioned is further evidence that it remains criminally under-appreciated.

However, I was glad that a lot of time was spent on the classics, as Black Christmas, The Changeling and the aforementioned Ginger Snaps are also given several pages of coverage. Burrell also gives special attention to Canada’s vital role in the slasher boom of the early eighties with sinewy spreads on Prom Night, Happy Birthday To Me, Curtains and My Bloody Valentine.

So, go ahead and pick this book up. For further info on Canadian horror, check out Paul Corupe’s awesome site, Canuxploitation.com. Speaking of which, here is Corupe’s 2012 Black Museum lecture on the subject. Enjoy!