After the power outage debacle at The Bloor back in January, we reassembled again last month to finally see the uncut version of the 1981 slasher flick My Bloody Valentine. It turns out that it worked out in our favour because now even more of the cast and crew turned up for the Q&A. In addition to director George Mihalka and actor Neil Affleck (Axel in the film), we had Lori Hallier, Alfred Humphries and Paul Kelman (who played Sarah, Howard and T.J. respectively) as well as line producer Bob Presner and composer Paul Zaza. 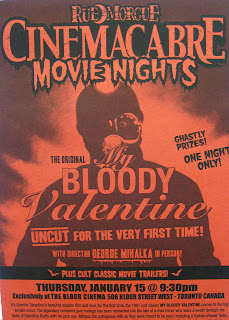 There was a little delay writing about this because I was waiting on some video accompaniment. My friend Rob Mitchell is a Toronto-based videographer who documents a lot of events around town and I was waiting for him to post the footage. Here is the video of the night’s festivities.

I hope you enjoyed that. I know I did. My favourite part of these Rue Morgue Cinemacabre Q&A’s is how appreciative (and often even stark surprise of) the filmmakers and cast - whether it be J.D. Feigelson, the writer of Dark Night Of The Scarecrow or Tom Waites, who played Windows in The Thing - are that people are still championing their work so many years down the road. What can I say? We’re a loyal bunch.

I know I’ve always had a soft spot for My Bloody Valentine, as I’m sure many of you have. It gets lumped in with all the B-grade slashers that flooded the market after Friday The 13th, but I think My Bloody Valentine offers more than a lot of its contemporaries did. Without even mentioning the iconic Harry Warden and the mine – which is a character in itself – there is a lot happening here. My Bloody Valentine deserves praise for doing things that most movies just don’t do. First, there was an attempt at realism. I spoke before about how Mihalka was attempting to get away from the ‘Ken & Barbie’ aspects of the slasher genre and really make things count. Setting the story within a small town populated with working class characters was a departure from the usual spoilt rich-kids of the genre. There’s also a moment where the jig is up and the revelling partygoers don’t stick around to get offed by the killer, they get the fuck out of dodge. That’s something people in most slashers STILL don’t do, even almost THIRTY years later. Perhaps most important is the gore that has been restored is all good stuff. We’re not talking about a few seconds here and there – as most so-called Unrated editions are guilty of – we’re talking MINUTES here. The MPAA were merciless with this one, so much so that the score had to be redone, as was touched on in the videos above. And I’m glad that memory served me correctly about just how prominent Moosehead beer was in this movie. It turns out they WERE a sponsor. I knew it! Seriously, you can make a drinking game out of how many times it shows up in the first act. 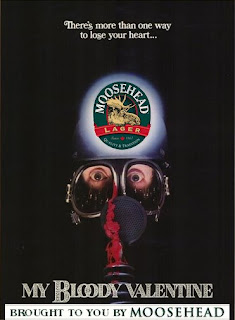 It was a really fun evening and the kind of thing that was worth waiting an extra four months for. If you want to check out more of Rob's videos, you can visit his website here.
Posted by Jay Clarke at 9:15 PM