We Lost Another One Today. 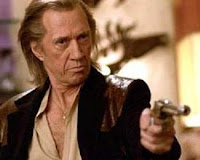 I just found out the sad news about David Carradine. He was just found dead in his hotel room in Thailand. He was 72. There are conflicting reports at this time about whether his death was a suicide or from natural causes, but the end result is the same. We've lost another genre icon. Carradine appeared in hundreds of movies and television shows, and in the last few years enjoyed a bit of a mainstream comeback, stemmed by his role as the title character in Quentin Tarantino's martial arts homage Kill Bill. Carradine was most known before that for his role as Frankenstein in the 1975 cult classic Death Race 2000 and as Kwai Chang Caine on the TV show Kung-Fu.
R.I.P. Mr. Carradine.
Posted by Jay Clarke at 10:10 AM

At the age of 72 I'm inclined to think he died of natural causes...mind you, I suppose life would get a little tedious at that age.