Hey everyone. Since I wasn't here last week, I'm going to make number twenty a super-deluxe DKTM. So, let's see what we've got here.

Here's a quartet of trailers for upcoming stuff I'm looking forward to.

Here's a little article I found on Chud.com that brought a smile to my face. It's a list of 6 Reasons Why Horror Fans Make The Best Film Fans. Here's number six for example.

"They're Prospectors. Being a horror fan isn't easy. There's a lot of horror out there, and you have to wade through a whole bunch of dross to find the gems. But that's what any good film fan should be doing anyway - not just waiting to be handed the best of the best but be out there, on the ground, sniffing out the best. And the best way to really appreciate the good movies is to spend a lot of time with the bad movies."

Nightbreed Reborn... With YOUR Help!

An article on Icons Of Fright turned me onto this Nightbreed petition. See, the version of Clive Barker's 1990 horror film Nightbreed that made it to theatres was not the original cut. It was heavily massacred by the studio because they (as is sadly often the case) didn't 'get' Barker's vision. They couldn't wrap their heads around the fact that they had a monster movie where the monsters were the good guys, so almost a half hour of footage was cut removed from the film. This footage was thought lost, but some digging by Barker super fan Mark Miller discovered recently that was not the case. After talking to the right studio exec, Mark was told the footage not only existed, but could be accessed easily. It was just that it wasn't worth the money and trouble to pull it out. Here's where YOU come in. Do you want a restored original cut of Nightbreed on DVD? I know I do. Click here to get more info on letting 'the powers that be' know that you want to see Nightbreed the way it was meant to be seen.

Are you getting sick of me talking about this movie yet? Here are two more one sheets for the upcoming Brit horror flick Doghouse. 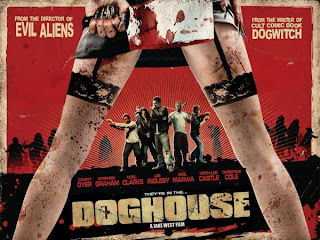 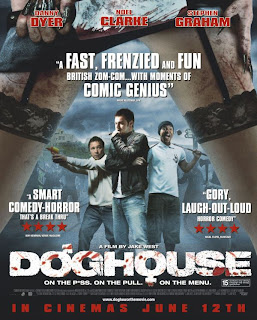 This Eases The Pain A Little.

After receiving the terrible news (for me, at least) that John Lithgow will be playing the baddie in the upcoming fourth season of Dexter, I was inconsolable. I fucking hate that guy! He is probably one of the biggest hams in show business and now I won't be able to switch the channel every time I see him on TV - such was the case with Third Rock From The Sun, likely the most unfunny sitcom EVAR next to Everybody Loves Raymond. However, the news of actress Courtney Ford being cast as a reporter on the show is good news. Maybe I'll just have look up this little movie called Alien Raiders. Click here for the original news item from Bloody-Disgusting.

Gearing Up For Number Four.

Now that his acting gig in Quentin Tarantino's new picture Inglourious Basterds is done, Eli Roth can now get back to concentrating on his filmmaking career. While talking with Empire Online last week, he let it slip the title of his next project. Endangered Species. He also still has plans to do a full feature of his Grindhouse faux trailer Thanksgiving, as well as a larger budget sci-fi flick. Click here for the original story.

Well, that's it for now. Enjoy your Sunday!