You know it's funny. No matter how much you ensconce yourself into a particular subject, there will still occasionally be whole phenomenon that slip by you. This was the case with writer David Wellington's Monster series. I was perusing Cory Casciato's blog The Inevitable Zombie Apocalypse a few weeks ago, when I came across his review of Wellington’s novel Monster Island. I'd never heard of this before, but from the title of Cory's post – I believe the word he used was 'brilliant' – I could see that he was pretty enamoured with it. That was all I needed and headed out to my local Chapters to pick it up. It was then that I saw it was actually the first book of a trilogy, so I had some serious reading ahead of me. It was exciting to have this whole new zombie epic of sorts just suddenly fall in my lap. I mean, I MUST have read about this in Rue Morgue or somewhere back in 2006, it just must have not stuck for some reason. Apparently, Island was originally released online serially as far back as 2004! Who knew? 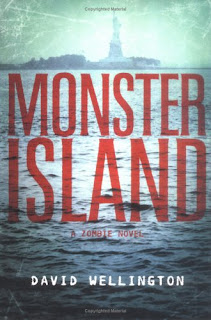 Anyway, zombie apocalypse, I'm already in right? Get this. I'm waiting in the checkout line behind some coupon clipping old lady, so I do the logical thing and read the back cover and spy this...

“From the other side of the planet, a small but heavily armed group of schoolgirls-turned-soldiers comes in--” WHAAAAAT???

No one told me about schoolgirl soldiers! Needless to say, this book was devoured in a weekend and you KNOW that's a big deal for me. I find it amazing that considering how saturated the zombie subgenre is there are people out there that are still mining gold out of it. I wrote recently about my fantastic experience with World War Z. It all felt so detailed and covered scenarios that I hadn't even thought of. I constantly daydream nine-to-five about this stuff and still Max Brooks was five steps ahead of me. In a way, Monster Island does the same thing. It is not as pervasive and global a story as WWZ, but it is no less compelling. First, Wellington begins the story in Somalia with an original concept – at least to me – where anyone who had been in a well-established nation when 'The Epidemic' hit, was pretty much fucked. The only nations that survived were the ones in the third world because they were already hardened by death and misfortune. “Places you wouldn't walk out the door without a gun”, as the main protagonist Dekalb puts it. He is a UN weapons inspector, who falls in with a local warlord named Mama Halima who is dying of AIDS. In exchange for the safety of his daughter, Dekalb must travel to the U.S. to get the medication Halima needs to survive. Travelling with him, are the squad of aforementioned schoolgirl soldiers. It's a great setup and the story becomes even more intriguing once they reach New York. Wellington spends a lot of time describing post-apocalyptic Manhattan so it feels like you too are dodging flesh eaters like the characters in the story. It is probably the most absorbing portrayal of NYC

I've read since The Stand. Speaking of which, Monster Island reminded me of that Stephen King touchstone quite a bit actually for reasons I won't get into here. Needless to say, that is a big compliment. Even though Monster Island boasts only a handful of characters, the scope is of an epic nature. I cannot wait to read Monster Nation and Monster Planet, the following chapters of the trilogy.

I realize I’m late to the party on this one and probably preaching to the already initiated, but if haven’t read this, GET ON IT! It has everything you like about the zombie genre, with an extra dimension that makes it even more of a page-turner.
Posted by Jay Clarke at 10:14 AM

I love your site! I'm an avid horror movie watcher/reviewer and lover of the genre so it's always a treat to see someone else entrenched in its bloody world as well. Looking forward to reading more.

Thanks for the kind words! You said reviewer, where can I find your stuff?

I just found your site (googled "rue morgue on csi" and was browsing through and came across this post. I also recently finished this same book and posted my own review on June 19. I guess that's not much of a coincidence, but it's funny to me.