So, as promised, here's the skinny on how this year's 24 Hour Film Race shoot went this past weekend.

9:30pm – I arrive at Mike Schwartz’s and we get ready for the email that will be sent to us stating the theme and surprise element we have to use in the short.
10:00pm – The email arrives. The theme is ‘Payback’ and the surprise element is the ‘Spraying of Perfume/Cologne’. Schwartz & I, our editor Mark and Schwartz’s wife Rachael start spit-balling ideas. Schwartz tells me he wants to use his dog (a Pomeranian named Boo Radley) in the film because he recently went to a psychic and she told him that his next film project should involve Boo. At first I think he’s kidding. Isn’t there some adage about never working with animals and children?
10:30pm – Every idea being put forth seems to involve the dog. Now ALL I CAN think of is the dog.
11:00pm – I come up with ‘the nugget’, but I am not convinced Boo is going to be receptive to ‘direction’ when we start shooting. Schwartz assures me it will be fine.

Who can say no to those eyes?

12:00am – I start writing the script. Rachael has gone to bed and Mark has gone home to compose some music for tomorrow.
1:00am – I finish the script. It is two pages long, which is a little concerning. I don’t think there is a minimum length requirement, but that works out to two minutes of screen time, plus credits. Granted, there is a LOT of action, but still. The Mountebank (my 24 hour film last year) script was originally six pages and ended up being three-and-a-half minutes long. We begin the shot list.
1:30am – Schwartz & I take a trip out to the 24 hour Vet Clinic to get a dog cone we need for the shoot. He’s in there a while.
2:15am – We finish up the shot list. Sixty shots. That’s an insane amount! We’re going to have motor through the majority of them to finish on time.
3:00am – We hit the hay for a few hours.
6:15am – We wake up and have some breakfast.
7:00am – Thom, our actor, arrives and we start dressing the apartment for the shoot.
8:00am – We step out to shop for some supplies.
9:00am – We are back at the apartment, setting up the camera for the first shot.
9:15am – Our fifth and final member of the crew (Terence) arrives.
9:45am – The first shot is in the can! That puts us almost three hours ahead of last year’s pace. 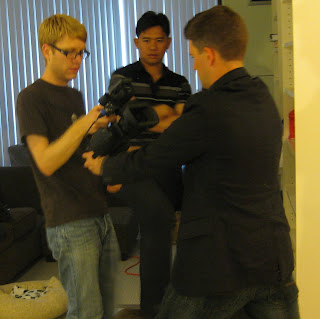 Schwartz, Terence and Thom sizing up a shot.

12:00pm – Twenty shots done. Fourty more to go! Mark has the brilliant idea to capture and edit what we have so far.
1:30pm – Lunch break. Pizza, the staple of any film shoot.
2:45pm – Onto the bedroom scene. We have to garbage bag the windows. Yay! My favourite job in the world.
3:30pm – I am standing over a bed holding a rope that is attached to a half-naked dude. Don’t ask.
4:00pm – We are burning through the script and what’s best is we are editing as we go. Genius!
4:45pm – Preparing the last shot.
5:00pm – We have wrapped photography!
5:15pm – Schwartz, Terence & I are doing some foley, both live and pinched from the Web.
5:30pm – We are shooting some last minute pickup shots, due to a continuity issue.
6:00pm – Mark is working on a rough cut. Since we are actually CLOSE to the drop-off point this year, we’re still pretty good for time.
6:30pm – Wow! The rough cut is not nearly as raw as I was expecting. Now onto the sound mix and colour correction.
7:30pm – Dinner break.
8:00pm – We watch the newest cut. We’re almost there. There are three things I’d like to fix, but I don’t think we’ll have time. Now to add some end music and we should be good.
8:30pm – We show the latest cut to an impartial party – Rachael. She points out a few things that aren’t as clear as we thought they were, but she can’t believe all the footage we shot fits together as well as it does.
8:45pm – Finished! For better or worse.
8:50pm – Of course we’ve hit a snag. We seem to be having a problem transferring the short to a DVD. Oh my God, we’re SO CLOSE!
9:15pm – We’ve come up with a solution, but now we’re running dangerously low on time. Watching progress bars has never been so excruciating!!! 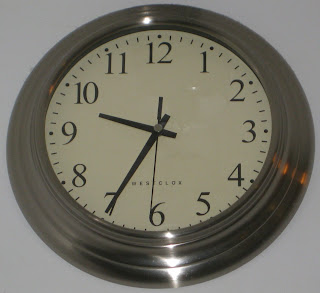 Time is a WHORE.

9:30pm – I’m sitting outside in my car waiting for Schwartz to come and hand off the finished product. It’s coming.
9:40pm – Schwartz hands me two copies in different formats. I am off.
9:47pm – I walk through the doors of the drop-off point, The Duke Of York. Yes, you read that correctly, I made it there in seven minutes. It was a combination of close proximity and inadvisable driving. I hand our short ‘Snip’ over to the 24 Hour Film Race representatives.
10:05pm – I am back at Schwartz’s place and we watch a copy of the movie. I think it’s an entertaining bit of film. It is at least memorable because of Boo. I cannot believe it, but Schwartz was right. With the use of some select phrases, a squeaky toy and a sizable amount of chicken, we got Boo to do EVERY SINGLE THING we needed him to. Boo is the STAR of this show (sorry Thom).
11:45pm – The traffic in downtown Toronto was atrocious. I’m finally back at home.
12:15am – Time for bed.

Well, that’s another one in the books. I hope it plays well to an audience. Technically speaking, it’s a little rough. Those three issues I mentioned are still in there. We could have fixed them, but then it wouldn’t have been in on time. It ended up being the same thing as last year, but we went the lesser-product-in-by-the-deadline-route this time around. We’ll see how it does. We avoided the mistakes of last year, but were almost done in by some new ones. That’s one of the craziest things about this competition. It is never the same set of hair-raising circumstances twice. Oh, and strangely the running time wasn’t an issue. Snip ended up being six seconds longer than The Mountebank, even though its script was three times shorter. Then again, we did have sixty shots this time around. I’m pretty pumped/nervous about showing it off. I’ll post it up here as soon as possible after Friday’s screening.
Posted by Jay Clarke at 6:36 PM

Sounds cool! I look forward to seeing it.