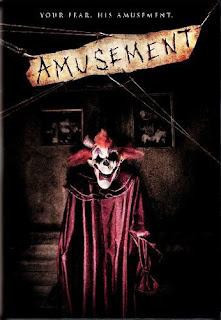 Three women are terrorized by a crazed maniac known only as The Laugh.

I found Amusement to be incredibly perplexing. The ideas were there, but much of the execution seemed clumsy to me. I’ll try and break it down for you. I had two big problems with this movie. The first was that it was all over the place. At first, it seemed like an “urban legend” style horror anthology. I didn’t know this going in, but I was fine with that. The first story was okay. It had a few plot points that stuck out sorely, but it was fairly short, so whatever. The second was probably the best, despite the obviousness of its punch line. The third – by far the oddest of the three – boasted a lavish location straight out of a Guillermo Del Toro picture. After the three stories played out, it became this weird crime thriller and then quickly descended into the tired depths of dreck like Captivity. My second problem was the constant implausibility. I’m obviously not going to stand here and say that movie plots have to be airtight – my favourite genre is horror for Christ’s sake – but if you go out of your way to make things ridiculously improbable, I’m afraid that’s a roadblock for me. There is a whole echelon of genre filmmakers that favour style over substance, where visuals and set pieces are paramount and everything else is just getting to those points, but MAKE AN EFFORT AT LEAST! Maybe I’m being overcritical of Amusement, but it seemed to me there were so many moments like that and there has to be a tipping point. The evil machinations of The Laugh make Jigsaw’s shenanigans seem rudimentary by comparison. It probably didn’t help that the villain was pretty laughable (no pun intended) as well. He gets pretty grating by the end, so his comeuppance couldn’t come soon enough.

Though in amongst all these clichés and logic leaps, there were some moments that surprised me, so I can’t write this movie off completely. It’s frustrating because I’d like to, but there is some good to be had here. Amusement is also good looking, and I’m not just talking about the lovely ladies that populate it. Which brings me to the two reasons I mentioned before… 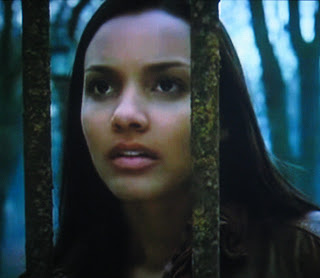 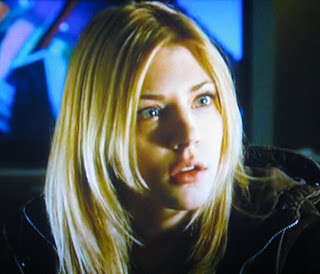 I first saw Jessica Lucas (left) on her brief stint on CSI, and then Cloverfield. She was supposed to be in Drag Me To Hell as Alison Lohman’s roommate, but I guess that got nixed last minute. Bummer! Katheryn Winnick was in a little under seen gem of a movie called Satan’s Little Helper and I’ve always kept my eye out for her since. But yes, the production design is top notch. It looks like some money was spent on Amusement, especially on the third story I mentioned before. I think that the studio may have had higher hopes for this movie initially. I wonder if Picturehouse being shutdown in mid-2008 had something to do with it being shelved?

I really wanted to like this movie, but something about it was always continually off-kilter. It is hard for me to pin down without you seeing it for yourself. But that’s your choice to make.
Posted by Jay Clarke at 7:59 AM

I do like style oversubstance and big set pieces over litle nuances of storyline BUT I didn't really enjoy this.

Quotes from my review that echo what you think:

"this film didn't make a lick of sense - in order to trick all three girls into kidnap, the clown must have been setting it up for fifty years or more. He appears to be able to be in ten different places at once, survives EVERY attempt to thwart him and then dies disappointingly in the inevitable finale. It seems that they threw together the ending simply to add a running time. It's much less "stupid" and more just "WHAT?! How did that...?"."