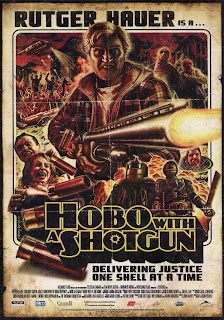 A homeless transient (Rutger Hauer) decides to clean up the streets of a crime-ridden city with the help of his trusty firearm.

There is so much great stuff in this movie; it is hard for me to find a place to start. I’m so happy for director Jason Eisener. Forget the fact he’s Canadian, and that he “gets” it, I think it’s grand that he was able to parlay a hundred-dollar short, made off the cuff for a contest four years ago, into a full feature film. And a solid one at that!

I also applaud him for staying in Nova Scotia to shoot it, therefore giving him the freedom to nurture his vision. There have been several movies of late that have gone for that old vintage 42nd Street feel, but Hobo is by far the most authentic to date. It goes way further than Machete dared to and is truer to that era than even Grindhouse. Now, I love Grindhouse (well, most of it anyway) but a lot of the time it was referencing those movies, whereas Hobo actually exists in that universe. Like Ti West’s House of the Devil, it simply IS one of those films. Hobo is retro down to its very core, featuring such things as VHS tapes, arcade machines and old Canadian money. And I haven’t even mentioned the aesthetic yet. Everything down to the film grain and shot set-ups were all perfectly rendered and the score mixed so well with the borrowed tracks that it was almost impossible to tell them apart. 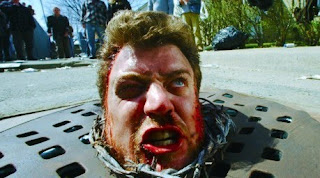 I also liked all the homegrown talent that kept popping up. Above, you may recognize Rob Wells, Ricky from The Trailer Park Boys. Brian Downey, who played Stanley Tweedle in the cult sci-fi show Lexx – coincidentally Downey and Hauer previously shared screen time together in Lexx: Eating Pattern – dazzles as the big bad Drake and a certain local television personality makes a cameo, as well. Hobo offers a parade of colourful characters, my favourite being a pair of mysterious assassins known only as The Plague.

As you can see, the costumes – painstakingly manufactured by Jason Johnson – are jaw-droppingly awesome and all I could think to myself was ‘man, I was I could weld because that would make one killer Halloween costume!’ Ultimately, the glue that holds everything together is Rutger Hauer. By playing the role completely straight, he became the sanest man in the asylum. A tall order and the only way it could’ve worked.

Then there is the gore. There are so many inventive moments that I’ll leave them for you to discover, but here’s an image that pretty much gives you an idea of what to expect. 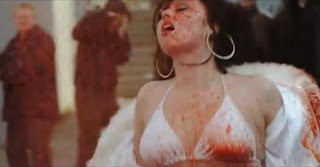 That lovely lady is bathing in the blood spewing up from a decapitated head, people. God, I love the arts!

Eisener and some of the cast were at the screening I attended and they were humbled by the positive reception. He rhymed off his many influences like Death Wish III, Class of 1984, Vice Squad and Street Trash, all of which were clearly evident within his flick. He also praised his producer Niv Fichman for letting him make a film with no rules. When asked what was next for him, he stated--

“I’d like to make a martial arts movie because there really haven’t been many made in Canada. Jesus Christ Vampire Hunter and Harry Knuckles are the only ones I can think of. So, now there will hopefully be three.”

I hope Hobo With A Shotgun does well, but I understand its audience is fairly limited. I don’t where and in what form it will play in the States, as I’m sure the MPAA will have a field day. Hobo is worth supporting though, as it is a sincere showcase of a by-gone era that fully delivers on the decadent promises of its trailer.

Below, just for shits and giggles, is Jason Eisener’s fantastic 2008 short, Treevenge.
Posted by Jay Clarke at 3:02 PM

Glad somebody other than myself loved this flick. You don't need 70s grindhouse gimmicks to make a funny 80s grindhouse flick.

Hobo kills with the humor and the gore and the dialogue. You can be a teacher!

awesome review. I too gave it my highest rating.

haha "That's why you should never hug a bear..."

I'm totally using that "you know how I know your pussy is wet?" pickup line the first chance I get!

I must be totally off my rocker but I thought this was one of the most brilliant movies of the last 30 years....

Nevermind the in-depth dialogue and story, but the cheesy special effects and foreshadowing were top notch.