Three sensuous moments in the life of Ana are detailed in this homage to the giallo.

As you could've guessed from its trailer, Amer is indeed a pitch-perfect love letter to the Italian filmmakers of yore. For this reason, I enjoyed it very much, but it wasn't a home run for me. The visuals are gorgeous, the sound design cracks and the music choices are spectacular, but I think I was expecting more of a conventional narrative. Amer is heavily stylized to the point where story – at least in its proper sense – largely falls by the wayside. That's not necessarily a bad thing, I just had to say, 'oh, so we're not getting a movie movie here, but a celebration of form, all right, that's cool too.' 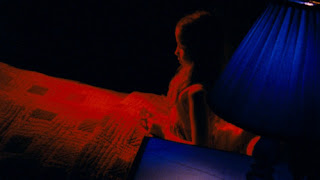 Amer starts out very strong, with a generous helping of Suspiria that sucked me in immediately. Unfortunately, where you really need a film to grab you is the middle, and this was Amer's weakest part. It wasn't as interesting as the parts before or after it, which caused the filmmaking style to then become distracting. However, when the third act hit, the film became more like what I had originally envisioned with Ana being luridly filmed the way guys like Sergio Martino used to do it – the camera often seemed to be having sex with the subjects it was capturing – moving about a house ripped right out of Deep Red. 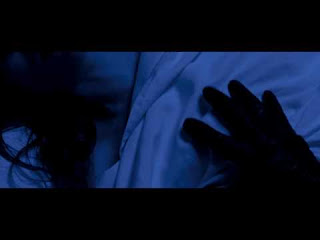 Apart from the striking aesthetics, I think the thing I was most impressed with was the economy of speech, as there were very few words spoken. In fact, I'd be surprised if there were more than thirty lines of dialogue in the entire film. I think this worked not only because there was little story to convey, but also the performances put forth by the trio of actresses (Cassandra Forêt, Charlotte Eugène Guibeaud & Marie Bos) gave you all the information you needed.

On a visceral level, Amer is a veritable feast, but anyone looking for a more traditional horror movie may be left with hunger pangs.
Posted by Jay Clarke at 10:02 AM