Last week I linked to a YouTube montage of gore scenes from various eighties horror flicks and one was tagged as coming from a G.L. Eastman joint called Metamorphosis. It was then that I remembered I actually had it on VHS. I acquired a used copy about a year ago that was still lying around awaiting repair. And by repair, I mean the coverbox as some of you may remember it was somewhat unique. It was, how shall we say, interactive?

So, after some careful fiddling and two replacement 1.5V batteries, I present...

Ah-mazing. I really can't believe that it still works. Now, I just have to find the green blinking eyes edition of The Dead Pit and the holographic coverbox for Demon Wind and I'll be set.

Oh, and I also figured I should, you know, watch Metamorphosis.

Dr. Peter Houseman (Gene LeBrock) is a brilliant scientist who is working on a serum that will eradicate cell degeneration. When his funding is threatened due to a lack of results, Houseman resorts to desperate measures and takes the serum himself! It doesn’t go well.

After putting in the tape, it continued to keep on giving by serving up this preview trailer for Future Zone, featuring David Carradine and his Power Glove!

As for Metamorphosis, it was ah-ight.

It's basically a low-rent retelling of The Fly, if you substitute an anti-aging serum for teleportation. That would be fine, except Eastman is no Cronenberg. From the get-go, we're flooded with scientific jargon that makes it seem a lot smarter than it actually is, but despite that I was into it. Then the middle act hit and it really started to drag. That’s not to say there wasn’t fun to be had here though. The gore is fairly decent, although I was surprised to find that Metamorphosis was made in 1990, as I would've guessed it was older. 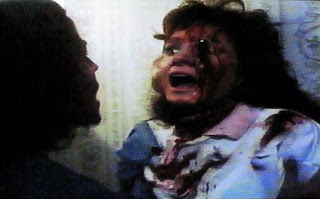 There’s also some great dialogue. Houseman shows up at his love interest Sally’s (Catherine Baranov) front door, presumably springing from the bushes, as she comes home.

Her reaction? It’s not, ‘oh my God, that’s unethical’ or ‘oh my God, we have to get you to a hospital’, but rather…

“That's fantastic, do you want to come in for some coffee?”

She’s not the only one with choice lines. Dr. Houseman’s sidekick Willy (David Wicker) is so hilariously nerdy that he’s practically the Screech of lab assistants. Although, Dusty Diamond never got his throat ripped out. There’s also a random and brief appearance from Laura Gemser as a prostitute. I guess she must have had a few days to kill before shooting off to Utah to work on Troll 2. 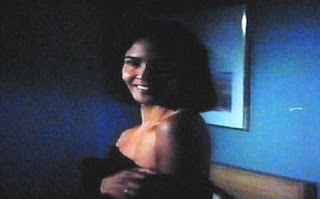 However, like I said, Metamorphosis rapidly runs out of steam from there and by the end - which features one of the bigger wtf moments I’ve seen in a while – I was pretty much done with it and left scratching my head.

Sooooo, our primordial ancestors were reptilian and had an affinity for beating on sluts??? I’m confused.

This whole experience was mildly ironic as I spent the entire movie waiting to see that YouTube clip in context and it never appeared. At first I thought I had a cut version, but when I re-watched the Gorezone clip, I realized said clip wasn’t from Metamorphosis after all!

I don’t want to say the coverbox was better than the movie, buuuut…
Posted by Jay Clarke at 10:08 AM

Hell Yes! I can't believe you got it to work and it's still in that good of condition.

Dude unbelievably, you are the only frickin person on the whole internet that list the battery size for the cover. Holy smokes!!!