Hey folks. I hope your St. Pats hangover has finally subsided. In the meantime, here's some horror tidbits from the week at large.

Here's a cool sign I saw over on The Spooky Vegan's Tumblr. 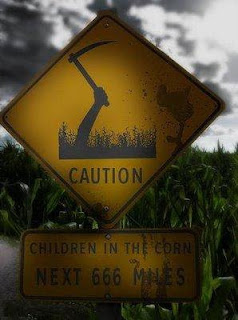 Not that I would ever find myself driving through Nebraska, but that's not a sight I would want to see, especially if my gas gauge was standing at E.

I was sad to hear about the passing of Michael Gough this week. The British actor who appeared in over a hundred films died in London at the age of 93. He was perhaps best known for his role as Bruce Wayne's butler Alfred Pennyworth in the Tim Burton/Joel Schumacher Batman movies. I, however, remember first seeing him as Dr. Storm in the 1973 flick Horror Hospital. It used to play on First Choice all the time when I was a kid and you can imagine that a Rolls Royce decked out with blades that decapitated you as it drove by stuck in my ten-year-old brain.

Please Sir, May I Have Some More?

The new trailer for Yoshihiro Nishimura's Helldriver popped up on Twitch this week. The pseudo-sequel to 2008's Tokyo Gore Police looks to serve up more of the same sinewy goodness.

You either love this stuff or you hate it. I am firmly planted in the camp of the former. I mean, it's Eihi Shiina with a FRICKIN' CHAINSAW SWORD for fuck's sake!!!
Posted by Jay Clarke at 11:04 AM