Hello all, got some cool stuff for you today to get you out of that funk of losing an hour's sleep last night.

It's All About Preparation.

If you're like me, you spend a chunk of every day - especially if you are stuck behind a desk like I am for the old nine to - wondering about your reaction to a sudden zombie apocalypse. You may have even written out a list of supplies and an escape route, not that I have it tucked away in my desk under the paper clips or anything. Anyhoo, my buddy Darryl forwarded me this handy survival sheet from Gunslot.com for emergencies. 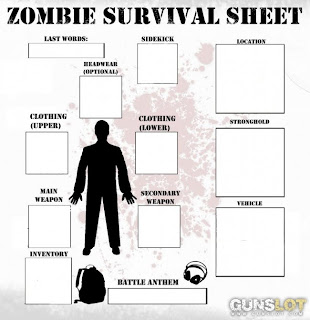 For shits and giggles, here's mine;

Last words: "I'm too old for this shit!" (explosion from palmed grenade)
Sidekick: My trusty samurai sword. Hey, it works for Michonne!
Clothing (Upper): My Video Dead T-shirt, over some sort of thin Kevlar vest.
Clothing (Lower): Something long and durable, with lots of pockets.
Main Weapon: MP5, with silencer & flashlight attachment.
Secondary Weapon: Sawed-off shotgun, to keep handy for close encounters of the undead kind.
Inventory: Darn, I wish I had my list...
Battle Anthem: Oh, you know there would be a mix tape, but for now I'll go with Battle Without Honor or Humanity by Tomoyasu Hotei.
Location: The good ol' Big Smoke.
Stronghold: Well, my office has a warehouse, which makes for a fairly good defensible position. When things settled down though, I'd probably head north and find me an island on a lake somewhere.
Vehicle: If I could get my hands on one of those armoured transports, that'd be sweet. But in a pinch I'd just have to Ash-up my Chevy Cavalier.

Let's Play VHS What If?

There are a handful of VHS archivists in the GTA, one of whom is known in some circles as Bub Logan. Over the last few weeks, Bub has been showcasing an awesome new project on his Facebook page. He is basically taken films and fashioned VHS coverboxes as they would have looked like if they had been released by certain companies during that era. For instance, below are the first two in the series. 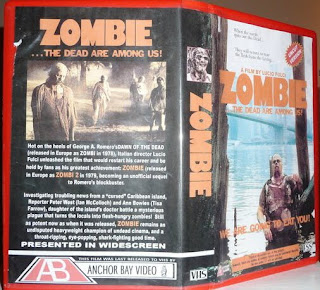 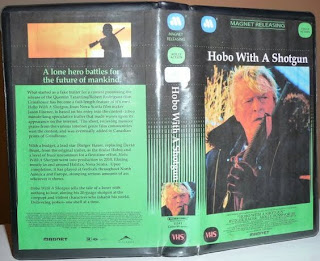 I KNOW, right??? Totally badass. Here's hoping there are more to come. Bub aka Tal Zimerman also has a poster blog on Fangoria.com called Paper Cuts and runs a business called Toronto Cult Paper out of Eyesore Cinema.

So, DirtyRobot recently forwarded me some video hilarity. Two old Cockbuster customer service training videos from back in the day. These things are funny (and sad) because they are so true.


Too bad they didn't apply that LISTEN.THINK.ACT motto to their business model. Oh SNAP! Seriously though, it's no wonder they're going tits up with the parade of bad decision making made from on high. It reads like a laundry list. They burst on the scene in the late eighties, bullied all the smaller shops out of existence and then thought they were infallible. This attitude unfortunately made them complacent, short-sighted and unwilling to accept change. It explains why they delayed carrying DVD for a full year. That's not going to catch on, they said! What's that? We can buy this fledgling company called Netflix for a measly fifty Mill. No thanks, we're doing just fine. 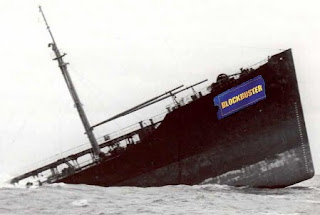 I think probably the most perplexing was their abolishment of late fees. I assume it was a move to distinguish themselves from Rogers which became a fairly decent competitor for a while. They thought it would make them look like the good guys, if they let you keep their movies a little longer. Only problem was, they also chucked out a good share of their revenue in doing so. And guess what? It's not going to make us like you, we're only going to abuse you like an unwanted stepchild. Late fees were part of the public consciousness and an accepted part of renting. Now, you're telling me that holding onto this copy of COD4 for a month now only costs twelve dollars instead of fourty?! Absurd.

What's that sound? It's me tap dancing on your grave.

Phew, I went over three years before going on an extended BallBuster rant. I gotta say, I'm pretty proud of my restraint.
Posted by Jay Clarke at 12:10 PM