It Came From The Archives 10!

You know, it's a real shame. Being that I am moving in a few weeks, I've been taking the opportunity to do some purging. Unfortunately, this means chucking out boxes and boxes of disused VHS. It kind of sucks, as you spend all this time dubbing various TV shows and movies only to pitch them fifteen years down the road because they're practically useless. I guess it's the way of things. However, I am also transferring some of the more interesting stuff to DVD. 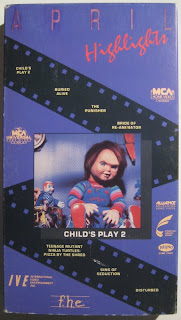 That's a promo tape schlepping videos that released in April 1991. Retailers would generally get monthly magazines - of which I have a ton, or at least the horror pages - and videos from distributors selling their upcoming goods.

Which brings me to this month's archive item. I've got some freshly uploaded videos for you. Check out the track list underneath the embedded video.

You may have noticed from the coverbox picture that the tape had more trailers on it, but I sadly taped over them with the ones featured below.

This second video is a collection of trailers from various Major Video in-store promo reels, taken from tapes that ran on a loop. I left out the film montages set to the tune of Jackie Wilson's "Lifting Me Higher" that used to play endlessly.