The Woman With Two Faces.

Ne te retoune pas (Don’t Look Back), a thriller that caught my eye when it played Cannes in 2009 recently showed up at Eyesore.

A film that features both Sophie Marceau and Monica Bellucci?! You don't have to twist my arm. 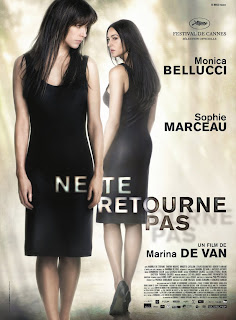 Jeanne (Sophie Marceau) is a writer whose surroundings suddenly begin to change. It starts with something as simple as a misplaced piece of furniture, but rapidly escalates from there. Her husband, her kids and then finally, herself morph into completely different people and no one seems aware of it, except her. Now, trapped in an unfamiliar body (Monica Bellucci), she struggles to figure out the cause.

After watching Don’t Look Back, I learned that director Marina de Van also made In My Skin, a 2002 film I found extremely fascinating. It makes so much sense though, as a lot of the same themes involving body manipulation reappear. The first hour of this film is excellent. Marceau does an excellent job of reacting to her ever-shifting environment and I was fully invested. However, it was when the physical changes started happening that this film started freaking me the fuck out. Using visual effects, Marceau is transformed piece-by-piece into Bellucci. 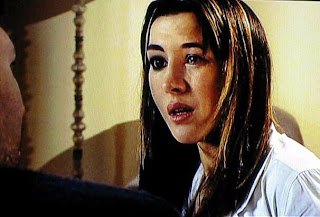 This really messed me up, as my brain kept rejecting what I was seeing. I literally had to pause the film for a breather at one point. All I know is that I was relieved when the change was complete and looking at the full-Bellucci. It's some really awesome CG work though. If the folks over at Disney had gotten these guys for the eighties Jeff Bridges bits in Tron: Legacy, well… it would’ve been less creepy anyway. There is also some great stuff towards the end involving forced perspective similar to Michel Gondry’s Eternal Sunshine. Bellucci was equal to Marceau in the task and put in another solid performance. I couldn’t help but think in the back of my mind ‘so, you’ve turned into Monica Bellucci, the woman with perhaps the best genes on the entire planet, is that really such a bad thing?’ 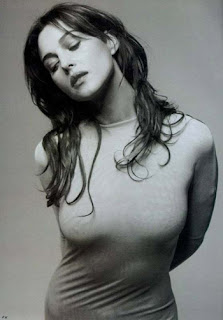 Alas, the almost two-hour running time could not sustain its mystery and Don’t Look Back quickly ran out of steam in the third act. There were several chunks that reminded me of Black Swan and Michael Haneke’s Hidden, but it ultimately wasn't as good as either. However, it is still Bellucci frantically running around equally attractive European locales, so I’m not going to complain too much. It seems every time I see her in a substantial role, she’s either being horribly abused or in some other kind of intense situation. I should really try and seek out some of her lighter fare. It'd be easier on the nerves.

Despite its underwhelming conclusion, Don’t Look Back decidedly won me over with its pair of fantastic actresses, beautiful backdrops and impressive tech.
Posted by Jay Clarke at 10:03 AM