Perhaps my most anticipated film of Toronto After Dark was Scott Schirmer’s dark thriller, Found. After seeing the trailer earlier this year, I was immediately captivated by its premise and at the same time envious that I didn’t come up with such an idea myself. 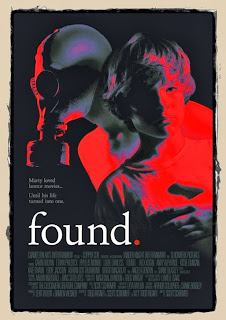 A bullied twelve-year-old horror fan named Marty (Gavin Brown) discovers that his older brother Steve (Ethan Philback) is a serial killer when he finds a severed head inside his closet.

I loved this film. There was just so much of my childhood here that I often felt like it was speaking directly to me. Now before I come off sounding like a complete psychopath – I mean, more than usual – I should clarify. I too, was an early fan of horror flicks, so the nostalgic value of seeing Marty take weekend trips to the video store to rent crusty VHS titles should be self evident. It is no wonder that throughout the first half, my buddy kept leaning over and saying “this movie is so you”. I also have an older brother and may have, on occasion, snuck into his room. Most importantly, I had to deal with constant bullying from my peers. This movie made me wonder how different my elementary school experience would have been, if my brother & I had had the same “do you wanna be the kid that gets picked on, or the kid that gets into trouble” conversation Marty and Steve did.

But enough about my darkest timeline, let me talk about the actual production. It is quite remarkable what Schirmer achieved on the minuscule budget of eight thousand dollars. He was so committed to telling this jet black fable that I was easily able to forgive the rough audio and occasional stiff exchanges between supporting characters. In truth, a lot of these common no-budget production woes were almost completely glossed over by a fantastic score that, despite being made by four different composers, came together as one cohesive piece.

In addition to his talented music men, Schirmer amassed many other gifted craftsmen for this production. The gore work by Clockwerk Creature Company was top notch and the title sequence by Lowell Isaac was the best I’ve seen this year. The fact that Found was a period piece also resonated with me. The nondescript locations kept the film fairly timeless, but that Marty’s world revolved around horror posters and video stores – and not cell phones and video games – put Found somewhere in the early nineties. This coincidentally coincides with my tenure as a video jockey.

Found was dark and disturbing subject matter, shocking even, and escalated quickly when Marty popped in a tape he pulled from his brother’s movie collection. However, even though much blood is split, Schirmer still shows restraint when it counts. With films of this nature there is a tendency to end on a few exclamation points, thus inadvertently pushing the film over the top into cartoonishness. This film pulled back at its climax, and that made it even more effective. This spoke volumes about Schirmer’s skills as a filmmaker and I think the decision elevated his film beyond simple exploitation.

The strength of the picture is, in large part, due to Gavin Brown though. This was his first gig and he performed admirably in a challenging role. I also had no trouble believing he and Ethan were siblings. I didn’t know until the Q&A that Found was adapted from a self-published novel by Todd Rigney. I will be looking that one up for sure, as it apparently delves more into the motivations of the Ethan character.

I am fully aware that Found is a niche film with a limited audience, but I was completely enraptured. It has been a while since I’ve seen a genre film that hit me on such a personal level. It is almost alarming how mild-mannered and innocuous Schirmer is in person, compared to the inherent ugliness in his film. I guess it just lends further evidence to the theory that it is the quiet ones you have to watch out for.
Posted by Jay Clarke at 10:00 AM

I'm glad you got to watch it. I'm pretty sure I was at the first screening for this film, which had the most people show up for it.

I thought it was a great film as well. The next day a friend and me came across their table and picked up copies of the DVD, which was signed by most of the cast and some of the crew.

How do you think others at your screening reacted to it?

Oh that's right, I'd forgotten you'd seen it. I've ordered the DVD and book off their site. They were sadly out of the Bag Lunch/Roach Man T-shirt in my size though :/

The reception was pretty polarizing, people seemed to really like it or really hate it.

I can't wait to watch it again.

It is rare I get to see a film before you do lol.