As I mentioned before, the Ontario-produced survivalist yarn, Solo was among my most anticipated at this year's Toronto After Dark. 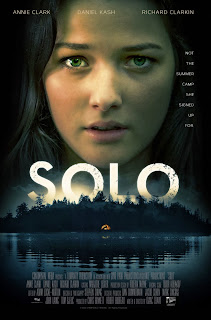 As part of a camp counsellor initiation, Gillian (Annie Clark) is escorted out to an secluded island where she must stay for two nights. Soon after arriving though, she realizes she is not alone.

Solo was an absolute treat for a number of reasons, first and foremost being that it absolutely gorgeous to look at. While it is true that it would be hard to screw up photographing such a beautiful locale as Algonquin Park, the cinematography by Stephen Chung went beyond just shooting the scenery. There were some creative things done here with shadow and negative space, as well as emphasizing the isolation of the island. This is also well complimented by Todor Kobakov's score. It is amazing how much tension the two of these guys manufactured considering very little happened in the first third of the movie.

Another thing I really appreciated about Solo was writer/director Isaac Cravit's narrative economy, as he didn't spend unnecessary time on setup. He introduced us to the main character and then stranded her almost immediately. This stripped down approach of less is more was very effective here. Everything about the film was simplistic, right down to the motivations of the antagonist, which only served to ground the story further.

Annie Clark was put out front and center here and performed admirably. It was a physically demanding role and that the filmmakers took the time to cast someone who actually looked like a real person did not go unnoticed by me. Her character made smart decisions and therefore kept the story from falling into a lot of the same slasher movie tropes. I also have to give credit to Cravit for not tipping his hand too early, as well. Gillian comes into contact with three different men, all of whom seem a little off in different ways, and I was never quite certain which one she should be most afraid of.


Solo is a well crafted piece that I will, from this day forward, unabashedly point to as top-tier Canadian genre cinema. Silent Retreat was good, but Solo was great.
Posted by Jay Clarke at 10:00 AM