The Power Of Money.

On the closing night of Toronto After Dark, I checked out E.L. Katz's black comedy Cheap Thrills. 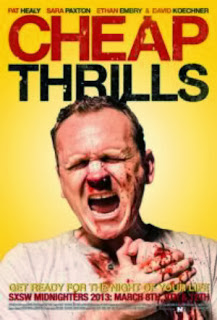 Craig (Pat Healy), a down-on-his-luck family man is drinking at a bar with an old friend named Vince (Ethan Embry) when they meet rich couple, Colin & Violet (David Koechner & Sara Paxton). Colin soon proposes a game where they complete certain tasks for cash, which Craig & Vince, both strapped for funds, happily oblige, not knowing what they are in for.

Cheap Thrills is a fun little movie. After having written director Adam Wingard's first two projects and associating with Ti West (having cast the two leads from The Innkeepers), it seems director E.L Katz comes from pretty good genre pedigree. His film flows very well and Katz found great actors to portray his characters. Healy is solid as the downtrodden every man at the end of his rope and is complimented well by Embry, who seems to pop up in a genre film once every few years. Koechner is also delightful as the grinning millionaire, Colin.

I found there were more than a few similarities between Cheap Thrills and another movie from this year called Would You Rather. Both films feature ordinary people doing random tasks for escalating amounts of cash, although they are two different flavours of the same theme. Cheap Thrills is definitely the more humourous of the two, with Rather erring on the side of nastiness. The game master of Rather, played by Jeffrey Combs, seemed more maniacal than his counterpart. Even though Rather had more characters and overall variety, I felt the intimacy of the foursome in Cheap Thrills worked in its favour.

Cheap Thrills was at least perhaps trying to make a comment about the class struggle between the haves and have-nots, whereas, apart from Rather's darkly ironic ending, it was a pretty straightforward yarn resting mainly on shock value. Katz's tale relied more on character and this was facilitated by the one-on-one nature of the challenges. The escalation of the bets put forth seemed natural, as did the characters motivations to complete said bets. Even if the movie's conclusion did feel inevitable, I can't say that there weren't some clever accents throughout that made me think it may go, at some points, sideways.

Cheap Thrills was a tight little tale and a entertaining watch. Katz clearly has a knack for character, pace and his emphasis on black comedy kept things from getting too morose. A perfect way to end things, I'd say.
Posted by Jay Clarke at 6:00 PM