Welcome To The Yankee Pedlar.

The closing Gala for this year's Toronto After Dark was Ti West's newest The Innkeepers. I knew very little about this since, up until Friday, not even a trailer had been released, but was pretty sure it would be my cup of tea. 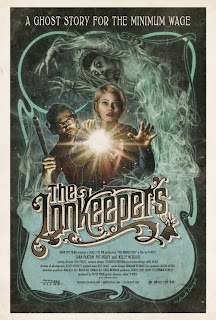 The last two employees of an old hotel that is going out of business, decide to do some amateur ghost hunting.
What a fun movie this was, and a fine example of doing a lot with a little. West is such a refreshing filmmaker because he understands the form of the ghost story so well. He is not interested in rushing to the next gag, as is the case with most horror films these days. He takes his time building atmosphere and keeps the gore very sparse, so it really makes an impact when it hits. Together with another strong, string-heavy score from Graham Reznick, West puts us through another solid ride. 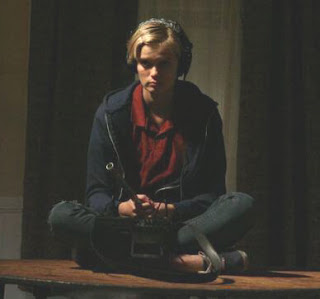 The main draw of The Innkeepers though, is Sara Paxton. She, as Claire, is absolutely adorable in this. She puts forth a kooky innocence that comes off so genuine, that you fall in love with her almost immediately. Her co-worker Luke (Pat Healy) is also great, and the two of them together make a great pair. Through West's dialogue, they absolutely nail the mediocrity of working in the service industry, with pitch perfect disdain and sarcasm. I also thought Kelly McGillis, as a TV-star-turned-faith-healer was also very good, as well. At first, it seemed she was just spouting clunky exposition, but she won me over pretty quickly after that. However, let's not forget the real star of the film; The Yankee Pedlar. West said at the Q&A that this was the hotel the crew stayed at while they were shooting House of the Devil, so I think it's pretty awesome that he was able to incorporate it into a future project. This modest little inn looked like it was destined to be in a film. 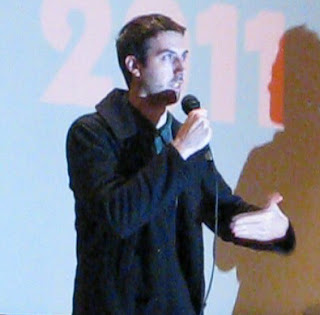 Director Ti West.
I am kind of fascinated by the presentation of this movie. As I said before, West leans towards an older school of filmmaking, but I don't think I've ever seen retro-horror sensibilities meshed so well with modern dialogue and milieu before. That is what might make this an even more impressive effort than his previous work House of the Devil, as that was actually set in the eighties. The Innkeepers does however, share the same problem of an anti-climactic ending, but I don't think it's as much of a detriment this time around.
The Innkeepers is a very enjoyable movie. In this world of sensory overload, I'm very grateful there are still genre filmmakers out there that still believe in the slow burn.
So, that's a wrap on the sixth edition of the Toronto After Dark Film Festival. Congratulations to the organizers on another successful year! I'll be back tomorrow with a rundown of my favourite shorts from the fest, and I'll also update you when the official TAD awards are announced. Till then, bedways is rightways now.
Posted by Jay Clarke at 4:02 PM

Jay, have you heard that a sequel has been made to the Serbian Film. It's called, of course, the Libyan Film, and it's real horror show - very realistic. It looks like one of those faux found footage movies done by an amateur film maker. Here's a clip: