This year, Toronto After Dark’s designated chiller was the festival circuit darling Absentia. I remember its extremely strong buzz at Fantasia in July – its screening sold out faster than high profile titles like John Landis' Burke and Hare - so I was really glad TAD was able to snag it. 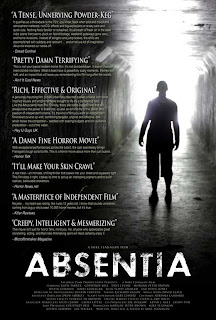 Seven years after her husband went missing, Tricia (Courtney Bell) finally begins the process of declaring him dead. Her sister Callie (Katie Parker) arrives to help out and soon discovers a mysterious tunnel near the house. Could there be a connection?
I really dug this. I love movies that seem spawned from urban legends. It came as no surprise to me that the idea sprung from a creepy tunnel across the street from writer/director Mike Flanagan's house, as I've had aspirations of using a similar location in my hometown for years.
It’s really impressive to me how simple an execution could bring forth so much dread. Obviously, some of it was due to the effective score and the excellent use of misdirection before some of the jump scares, but nothing contributed to the film more than the pitch perfect performances of the two leads. The film began with an extended dialogue scene, and their banter was so natural and genuine that I felt like I knew so much about them in just a small amount of time. So, now that he had me invested, Flanagan was in perfect position to put them in peril and have me care about it. 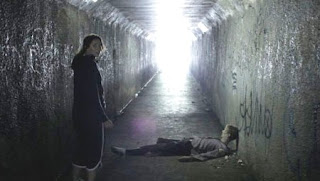 The most important thing to me however, was that Flanagan had the integrity to play out the third act like he did. Not to be spoiler-y, but once the antagonist is revealed, Absentia stays the course and doesn't go down the road that so many others have – much to their detriment. I tip my hat to him for having the courage to trust his audience. I also appreciated that the film wasn't ambiguous. Flanagan does allude to alternate scenarios, but the actual outcome is pretty clear. I think it needed to go down that way, for it to be as powerful as it was.
Absentia was exactly the kind of film I was hoping it would be and it deserves all the awards it has received on the festival circuit. It is a tight story, populated with real characters and soaked in atmosphere.
Posted by Jay Clarke at 10:07 AM