To all my brethren of the Great White North out there, happy Turkey Day! For the rest of you, I hope you are having a great weekend. Here's what was on my radar this week.
SpiderBytes.
Lianne Spiderbaby's web show Fright Bytes is still going strong, with the most recent episode covering the several makeup effects people that were in attendance at this year's Fan Expo. Check it out below.

To subscribe to the Fright Bytes YouTube channel, click here.
Bloody Blu.
Mention the name Intruder to any slasher fan, and it will be met with a grin of recognition. So, you can imagine my excitement when I saw on Twitch that Synapse is releasing a Blu-ray of Scott Spiegel's classic splatter film. 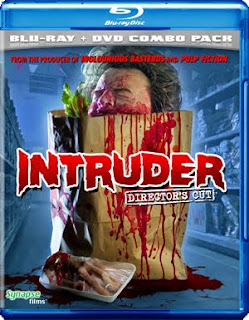 And better yet, check out these special features!
-All-New 2K Digital Restoration of the Original Uncensored Director's Cut
-Audio Commentary with Writer/Director Scott Spiegel and Producer Lawrence Bender
-SLASHED PRICES: THE MAKING OF INTRUDER
-Never-Before-Seen Extended "Murder" Sequences
-Outtakes from the Now-Lost Short Film, NIGHT CREW
-Original Cast Audition Footage
-Behind-the-Scenes Still Gallery
-Original Theatrical Trailer
The release date is December 13th, so it is just in time for Christmas! And because this announcement put me in such a good mood, I dug out an old vid I had of Greg Nicotero & Robert Kurtzman in their workshop circa 1988.

I'm afraid I have to end on some bad news this morning. Veteran actor and musician David Hess passed away suddenly on Thursday night. He was 69. Hess appeared in dozens of films, but was probably best known for his role as Krug, the sadistic gang leader in Wes Craven's seminal 1972 film The Last House on the Left. He was also an accomplished songwriter, having released several folk albums. I was fortunate enough to see him in person a few years ago, while he was here for a screening of Smash Cut and he seemed like he was in his element.
Posted by Jay Clarke at 10:47 AM