The Woman first came onto the radar at Sundance last January, when a certain patron took exception to the subject matter and inadvertently gave the production the best press money could by. This did not bode well for me, as I already had a strong aversion to the adaptations of Jack Ketchum. However, I do like director Lucky McKee, trust the Toronto After Dark programmers and was already downtown for the closing Gala of Ti West's The Innkeepers, so I figured what the hell, right? 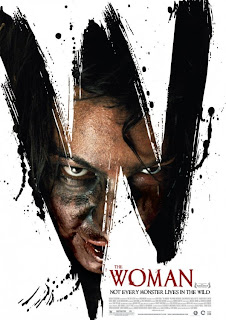 A lawyer (Sean Bridgers) captures a feral woman he discovers living in the woods by his property and attempts to civilize her, pushing his already strained family dynamic to the breaking point.
I'm going to keep this brief because I'd really like to just put this one behind me. I actively disliked The Woman. What is it about Ketchum that I just find so appallingly unimpressive? That's a tough one. I can't pin it on the subject matter, because there are other films that I have liked – or at least appreciated – that deal with similar stuff, so I guess it has to be the presentation. I get this is supposed to be satire, but aren't satires supposed to be funny? At no point did I ever find anything in The Woman amusing. I guess I also have little patience for how the abuse to the female characters of his works is supposed to be empowering. That is, in part, likely why Red is the only Kethcum work that elicited a postive response from me.
But, it is more than that. Due to Ketchum seemingly telling the same ugly story over and over again, I've gotten to the point where I can see every beat coming. So, now I'm not even surprised by how detestable things become. Yes, suburbia is hell with a picket fence; I GET IT! Do you have to be so on-the-nose about it? And as if to accentuate this already bold point, the music choices were often very jolting and fractured. The music itself was good, but its placement left something to be desired in my opinion. 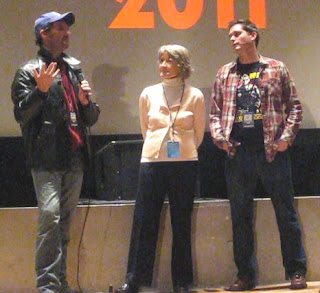 Actors Bridgers & Marcia Bennett and producer Andrew van den Houten.
As for the production itself, I can't really fault it. It was well made, and the performances were all very strong. The very brave Pollyanna McIntosh, disappears into the role of the feral captive, and Bridgers is front runner for villain of the year, as family patriarch, Chris Cleek. All the other family roles are solidly portrayed, but all characters I've seen before. Angela Bettis doesn't really get her moment to shine, until the climax when she finally rebels. McKee is certainly the most gifted filmmaker that has tackled Ketchum's universe, but somehow I don't think anyone could make this stuff palatable to me.
The bottom line is, I'm done with Ketchum. I get nothing out of it. I no longer want to spend the time watching them, nor the brain power – which is already in short supply – trying to dissect why I dislike them so much.
Posted by Jay Clarke at 1:43 PM