The opening night gala for this year’s Toronto After Dark Film Festival was the Canadian flick Monster Brawl. 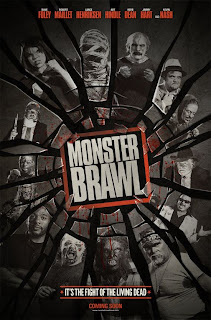 We’ve all done it. ‘Sitting around with our friends and coming up with who-would-win-in-a-fight scenarios. A popular one with my posse back in the day was ‘a shark versus an alligator in three feet of water.’ Later, Spike took the ball and ran with it with their wildly popular show The Deadliest Warrior, which used dramatizations & computers to re-enact battles between history’s greatest killers. Monster Brawl is the newest iteration of this, but with a genre twist.
Festival director Adam Lopez took to the Toronto Underground Cinema stage to introduce the film and in appropriate fashion, a heated confrontation emerged. 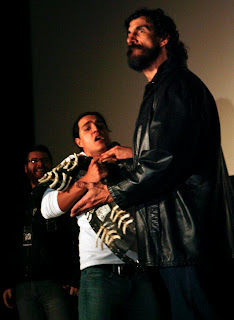 Director Jesse T. Cook, RJ Skinner (Werewolf/Mummy) & Robert Maillet (Frankenstein)
These onstage shenanigans set the tone for the good time we'd have with this movie. Melding the most ferocious figures in horror with a wrestling pay-per-view, director Jesse T. Cook fashioned a really fun event flick here. Granted, it is more of a concept than a functional movie, but that didn’t stop me and my friends from belly laughing through most of it. Monster Brawl wears its ripped-out heart on its sleeve. If you watch the trailer and it looks like something you’d be into, then you’re going to enjoy yourself. If not, then you should probably steer clear.
The movie is split up into five matches, which consist of two undercards and then two more matchups, with those combatants all vying for the final Championship deathmatch. I was expecting just a bunch of fights, but the movie is also broken up by entertaining origin vignettes, the best of which being the one for the marsh creature, Swamp Gut. 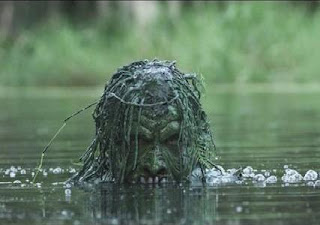 Cook again utilized the talents of The Brothers Gore, and their work is expectedly top notch, as the eight monsters all have their own distinct look.
And what pay-per-view style fight event would be complete without colour commentary! Dave Foley & Art Hindle were ringside throughout and miraculously the cheesier they got, the more it worked in the movie’s favour.
“Making his way to the ring is Frankenstein, or technically Frankenstein’s Monster… if you want to be a dick about it.”
Also, on hand, playing himself, was WWE icon Jimmy “Mouth of the South” Hart and he hasn’t changed a bit. Perhaps my favourite addition was Lance Henriksen’s Mortal Kombat-style narrations, like when a particularly vicious move was met with a disembodied “Sen-sational!” 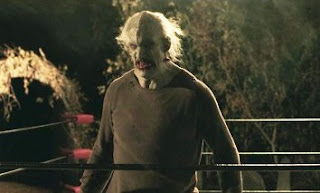 Monster Brawl was made for a very specific audience, but should appeal to anyone who has ever pondered those ‘what-if’ scenarios. Fans of wrestling and pay-per-view fights should also get a kick out of the proceedings, as well. Though it did overstay its welcome a tad, it’s still a silly and fun romp that put a big smile on my face. Monster Brawl… Wins!

Photo courtesy of Scott Chalmers.
Posted by Jay Clarke at 10:36 AM