Lock Up Your Fathers!

Last year, the Winnipeg-based collective Astron 6 offered Toronto After Dark audiences a faux-trailer for a little ditty called Father's Day. It was about psychopath run amok raping & killing Dads, and a ragtag trio determined to destroy him. Known for their wonderful shorts – Lazer Ghosts II and the awesomely bizarre Heart of Karl have played TAD in previous years – they enlisted the help of world infamous production company Troma to get their ambitious first feature off the ground. 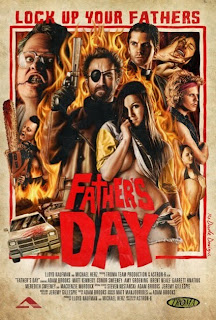 But, first things first. Before Father's Day, was my buddy Chris Nash's puss filled short My Main Squeeze and I'd say it went over as well as I expected it would. They ate it up!
I love the Astron 6 guys. They are deeply rooted in their retro sensibilities, yet their irreverent sense of humour always stays fresh. They have this ability to be absurdist, but their characters are completely of the world they inhabit. So, you can see that combining Astron 6's talents with Troma's resources would make for a very organic match-up.
I had a blast with Father's Day. It's totally up my alley, as it has ample gore, T&A and the gags come at a breakneck pace, so I was always laughing. As I've said before, I love their aesthetic and pretty much everything the collective stands for. Their ASTRN-TV framing device was fantastic, transporting me back to my First Choice days of the eighties, and their faux trailers for Star Raiders and Sexy Beach were priceless. 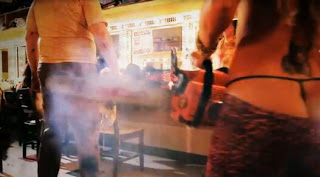 The hundred-minute running time of Father's Day presents an interesting dilemma. Their humour is best suited to shorts and the movie did lag at times while it tried to find its pace, so the decision to add an extra act to venture onto another wild tangent, was a bold one. The thing is, even though it makes Father's Day a lot longer than it should be, this extra twenty minutes totally makes the movie. 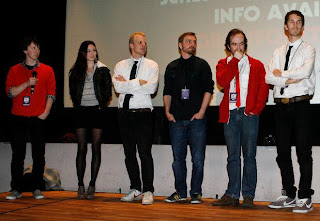 Due to its look and humble beginnings as a faux-trailer, Father's Day is inevitably compared to Hobo With A Shotgun, but I'd say that is where their similarities end. Hobo is more grounded in reality – a heightened reality, but one just the same – whereas the universe of Father's Day is more chaotic. And apart from more nudity and some ghastly penis trauma, I wouldn't say it's particularly more extreme than Hobo either. Also, I don't think Astron can match the skill of Eisener and Hussein, but that didn't make Father's Day any less enjoyable. There is no question that Father's Day will appeal to the same kinds of people though. And can you believe that Troma themselves even had doubts about releasing it? I mean, if Lloyd Kaufman thinks it's too much, you must have a winner on your hands.
Who would have thought a movie about raping Dads could be so much fun? Speaking of which, I had a conversation with a random guy while standing in line for Monster Brawl, who later turned out to be Mackenzie Murdoch, Father's resident sodomite The Fuchman. 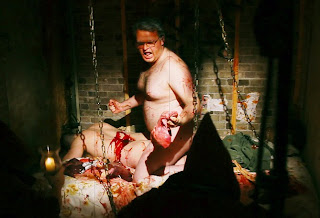 Imagine my surprise! I don't want to sound like a neighbour on the nightly news, but he seemed like such a mild mannered individual. Only at After Dark, eh?

Photo courtesy of Scott Chalmers.
Posted by Jay Clarke at 10:05 AM